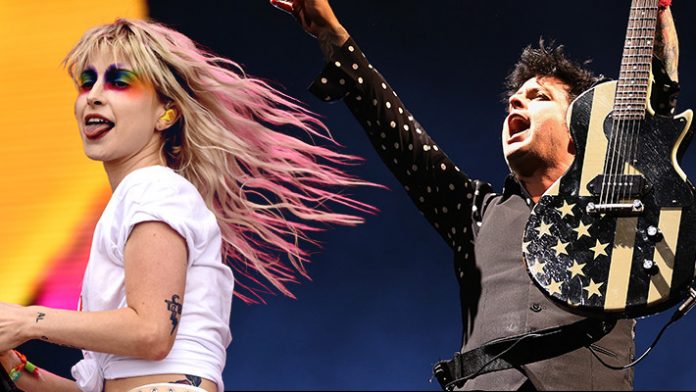 Indie music has grown to include so much. It’s not just music that is released on independent labels, but speaks to an aesthetic that deviates from the norm and follows its own weirdo heart. It can come in the form of rock music, pop, or folk. In a sense, it says as much about the people that are drawn to it as it does about the people that make it.

Every week, Uproxx is rounding up the very best of the indie releases from the past seven days. This week we got an EP of new music from Hayley Williams, a rock and roll crash course from Green Day, and another taste of the new Beach Bunny album.

While we’re at it, if you want more music recommendations curated by Steven Hyden delivered directly to your inbox every week, sign up for the Indie Mixtape newsletter.

Hayley Williams — Petals For Armor I

13 years after the release of Paramore’s Riot, you might think you know what to expect from Hayley Williams, but the first sampling of her debut solo album would give you quite the opposite impression. With the five tracks on display with Petals For Armor I, Williams seems to be taking more inspiration from Radiohead than Fall Out Boy. It’s a welcome change of pace and a true reinvention for an artist in the spotlight for so long.

Green Day — Father Of All

Green Day literally couldn’t care less across the 26 minutes of their thirteenth studio album Father Of All. They’re not as self-serious or trying to make a point about society, like they seemingly have been since 2004’s American Idiot. Most of the time, this works to their advantage. Of course, one might say that now is as good a time as ever for a band like Green Day to take aim at the current administration as they did 15 years ago. Instead, they chose to not give our President even the faintest glimpse of acknowledgment; perhaps by just having fun instead of taking the expected route, they made the biggest political statement of all.

With their latest record, Spanish Love Songs deliver a deeply personal punk rock epic that will get you pumping your fist and nodding along from its first moments. It’s a record about community and feeling like you’re not alone. “We want the album to be a knowing nod and a way to make the world a slightly more bearable, even if it’s just for 40 minutes,” vocalist/guitarist Dylan Slocum explained in a statement. The introspective approach to punk has made Spanish Love Songs a definitive band to watch, and landed them slots on tours this year alongside fellow stalwarts in the scene The Menzingers and The Wonder Years.

Later this month, Undercover Dream Lovers will release their debut full-length album It’s All In Your Head. Preceded by a series of impressive singles, “Chardonnay” is a groovy entry in the Undercover Dream Lovers catalogue, evoking the lo-fi dream pop that created a path for bands like Tame Impala and Wild Nothing to grow. With its woozy guitars and reverb-soaked vocals, “Chardonnay” is another exciting hint that It’s All In Your Head might be one of the great records of early 2020.

Gladie — “When You Leave The Sun”

We really loved the first single from Gladie’s forthcoming debut full-length album, and “When You Leave The Sun” follows it up strongly. Where the first single “A Place Far Different” utilized more industrial sounds throughout, “When You Leave The Sun” is more reminiscent of Augusta Koch’s work in Cayetana, with driving guitars and great vocal melodies to evoke the feelings of optimism that are still achievable, even in moments of despair.

Vundabar’s new album has been previewed by two singles with very bizarre videos, but that doesn’t mean that the music is any less strong. “Petty Crime” builds upon the classic Vundabar formula of lo-fi esoteric rock that stays with you. Brandon Hagen’s vocals are familiar and engaging, and the video offers a look into the lives of what I believeto be traveling salesmen with very slicked back hair and tanktops under suit jackets.

The fourth and final single from Beach Bunny’s new album Honeymoon also might be the strongest. According to Carolyn Droke for Uproxx, the new track finds Lili Trifilio “[coping] with the lingering pain and heartbreak of a previous relationship,” making for one of the most vulnerable tracks on the record. Starting out slow and introspective, “Promises” builds to a powerful close, in a way reflecting the last few years for Beach Bunny, which started out as the solo bedroom pop act of Trifilio and ended 2019 by signing to esteemed indie label Mom+Pop for the release of Honeymoon.

After years spent as a backing musician, James Elkington stepped into the spotlight with 2017’s debut solo effort Wintres Woma. Now, Elkington is back with his second solo LP, proving once again his skill as a singer-songwriter. “Nowhere Time” is the first taste of Ever-Roving Eye, with Elkington’s deep vocals supplemented by virtuosic guitar riffs, an upright bass, and cymbal-driven percussion.

For his forthcoming solo album, Christian Lee Hutson recruited Phoebe Bridgers to produce and Bright Eyes’ Nathaniel Walcott to lay down string arrangements, so he already had an upper hand in terms of indie credibility. On the album’s first single, “Lose This Number,” Hutson comes to terms with the end of a relationship by re-living a myriad of small, beautiful moments. Musically, the track features what Carolyn Droke calls for Uproxx “emotive strings that complement a gentle acoustic guitar and crashing kick drum.”

Three months after their single “Fox” exploded onto the indie/emo scene, Michigan’s Dogleg have returned with “Kawasaki Backflip” and the announcement of their debut album Melee. The new track doesn’t let up across its two and a half minutes, pushing full speed ahead as Alex Stoitsiadis weighs two options of dealing with anxiety and depression: will you let the frustration overtake you and burn it all down with fire, or will you stand idly by and let yourself be blown away completely by the wind?

Another Michigan band, Charmer have announced their sophomore album Ivy, which is previewed by the new single “Slumber.” The new track, along with most of Ivy, is a document of the time in everyone’s life when they stop long enough to realize that everyone around them — and they themselves — are forever changing. “Slumber” is about moving on, for better or worse, and is a lesson we should all probably take to heart.