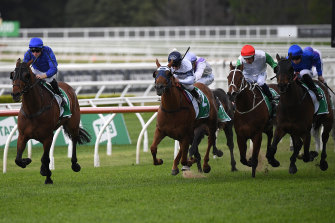 The lack of pressure in Saturday’s Chipping Norton Stakes has Happy Clapper’s trainer Pat Webster considering reprising the front-running tactics that had the great mare Winx chasing hard 12 months ago.

The popular miler holds an impressive record around the Randwick 1600m – being the only horse to win a Villiers Stakes, Epsom and Doncaster – and he has used nearly every style of racing in his nine races from the famous Alison Road start.

Happy Clapper could make his rivals chase him in the Chipping Norton Stakes on Saturday Credit:AAP

The most dramatic came in last year’s Chipping Norton Stakes, when he opened up a six-length lead before the turn before being run down by the mighty Winx.

“We might not die wondering again,” Webster said. “We tried something in this race last year and it took Winx to beat us, like she always did.

“I’m not saying we’ll got out and lead by a big space but, from the barrier, Tommy Berry will have the option to push forward.

“I would prefer to be out there in 10 because it will allow him to roll forward and take up a position in his own time if Tommy wants too.”

Tommy Smith always said it takes a 2000m horse to win a big Randwick mile because it is a trip were you just have to be tough.

Berry knows Happy Clapper’s will to win and called on it in the Craven Plate during the spring, when he set him alight from 1200m out and defied all attempts to run him down over 2000m.

“He is very tough, as we know,” Webster said. “There doesn’t look to be a lot of speed and pressure in the race, so I think you want to be closer to the front than the back.

“They will all know he is around on Saturday.” 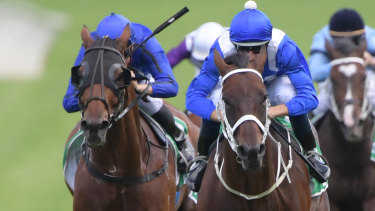 Dreamforce, which will have blinkers back on, looks the natural leader and should be able to dictate his own terms. Webster believes a slowly run mile would not be in the best interests of his warrior.

Happy Clapper has become more tough than brilliant as he moves into his twilight years and   does not have the turn of foot of $2.50 Chipping Norton favourite Te Akau Shark, but he will just keep finding the line.

“The worst result he has had over the Randwick mile is a fourth in an Epsom when we were treating him for the 10 days leading into that race because he got a piece of rio in his foot,” Randwick-based Webster said. “He loves his backyard.

“Tommy Smith always said it takes a 2000m horse to win a big Randwick mile because it is a trip were you just have to be tough.

“That is the Clapper. He has been doing great and his work on Tuesday was that of young horse, not a nine-year-old.”

Happy Clapper returned with a closing third in the Apollo Stakes but is an $11 chance for the Chipping Norton, the second of the group 1 races on Saturday.