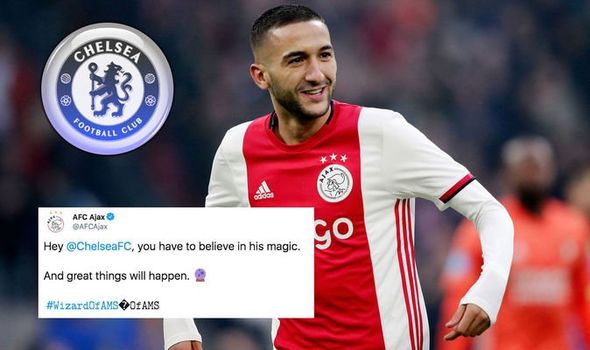 Ajax have promised that Hakim Ziyech will do wonders at Chelsea if the Premier League giants “believe in his magic”. The Dutch champions announced that they’ve reached an agreement with the Blues for the transfer of Ziyech, who will link up with Frank Lampard’s side on July 1.

Hey @ChelseaFC, you have to believe in his magic. And great things will happen

The two-year deal is reportedly worth £33.3million and could rise to £38m with potential add-ons as well as incentives but the star winger will spend the rest of the season in Amsterdam.

Following the announcement, Ajax took to Twitter where they appeared to be congratulating Chelsea on their purchase and promising that their investment will pay dividends as long as they show faith in the Morocco international’s abilities.

The Amsterdam giants tweeted: “Hey @ChelseaFC, you have to believe in his magic. And great things will happen.”

Ziyech joined Ajax in 2016 from Twente, where he recorded an impressive 34 goals and 30 assists in 76 appearances.

The 26-year-old went on to amass 48 goals and 82 assists to his name in 160 appearances at the Johan Cruyff Arena where he also won the Double last season.

This marks Lampard’s first ever signing as manager of Chelsea following a fruitless January transfer window which left the former England international frustrated with the club’s lack of activity.

The Blues boss said: “We probably become the underdogs and the outsiders because the teams around us have strengthened. It’s a fact.

“Every time I look at the TV, a player has signed for another club.

“Tottenham have signed a few — and they’re not far behind us.

“We have now missed two windows — and the fact we missed the last one made this a bit more crucial.”

Ajax manager Erik Ten Hag hinted that a move was imminent a few days ago as he expected Ziyech to join to another club over the last two years. 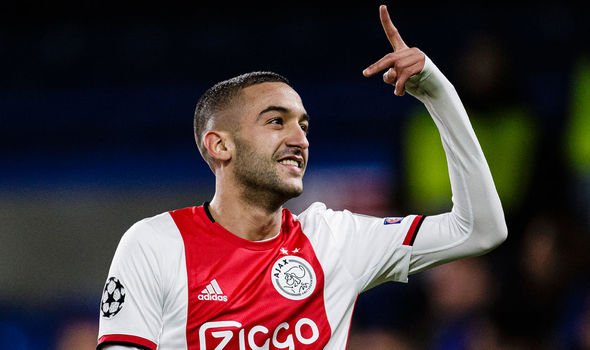 Ten Hag knows the forward always wanted to move to another team and is glad that he is getting his wish ahead of the summer.

The Dutchman said: “Ziyech to Chelsea? A transfer was coming, we expected it to happen.

“And I actually already expected this one or two years earlier. And each time it was: ‘Wow, he stayed again’.

“We are just happy that we will still have him until the end of the season.

“I know that our players are very popular with the big clubs in Europe. That is just great.

“I have known for a long time what Hakim wants. He has a picture in mind. He knows exactly which clubs he finds interesting and which not.

“Chelsea is a fantastic club. When it is final, I will be very happy for Hakim, and I am very proud of him.”