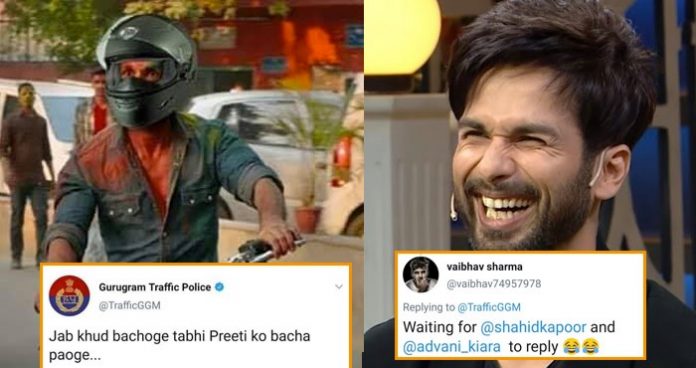 Agree or not but we all take traffic rules very lightly. When it comes to not taking traffic rules seriously, ignoring helmets tops the list. From our textbooks, advertisements to our friends and families, we all have been advised, encouraged to wear helmets while riding a bicycle, motorcycle, skateboard.

From being concerned about our hairstyles to many other reasons, people have enough reasons to ignore helmets. And seems like the only reason people wear helmets these days is to ignore getting ‘challan-ed’ (fined).

Over the past few months (or a year), various state police have gained a huge fan following on social media because of the way they are utilizing the power of social media to send informative and important information out there to the world. Besides this, it is their hilarious memes to witty replies which makes their Tweets go viral.

Recently, Gurugram Traffic Police via its official Twitter handle shared a hilarious tweet mocking all those who don’t wear helmets.

Gurugram Traffic Police used a picture from a popular scene of Shahid Kapoor from his movie ‘Kabir Singh’, where he goes to save his ladylove in the movie Preeti on his bike. Giving a reference of ‘Kabir Singh’ and ‘Preeti’, Grurugram Police wrote:

The Tweet has been receiving a lot of appreciation and amazing reactions from Twitterati. Here, check out the reactions of Twitterati on this:

You mean riding? Or you mean driving? I’m confused now.

Hahahah,,, good one and informative as well