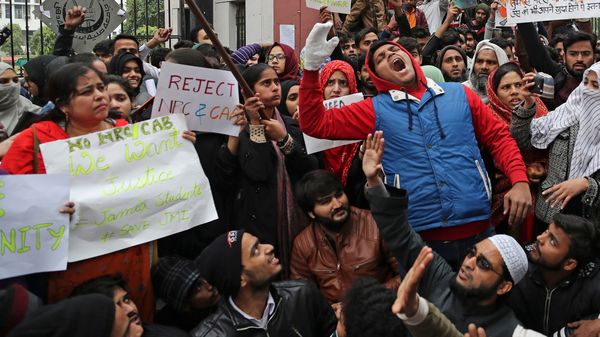 Hafeez Azmi, a Jamia student protesting against the Citizenship (Amendment) Act (CAA) at the university, said, “The group came walking from the Sukhdev Vihar side and shouting slogans. They deliberately stopped at the barricade near gate No. 1, where the main protest is going on. They were there for more than 10 minutes, chanting ‘Jai Shri Ram’ and shouting ‘goli maro….’ The police were standing right there.”

Some students showed video clips in which a few policemen could be seen walking along with the group of men while the latter were raising objectionable slogans.

In one of the clips, around 50 to 60 men are seen walking on the road opposite to the university, carrying national flags and shouting slogans. They slow down near gate No. 1 before stopping near the barricade, where the ‘goli maro…’ slogan was raised.

The men claimed to be former students of the university who were part of a pro-CAA group.

The police personnel present at the spot subsequently asked them to disperse and took them towards Sukhdev Vihar, students said.

Shortly after the incident, officials from the Jamia university proctor’s office and Jamia Nagar police station visited the spot to check on the security arrangements.

The student-protesters said the Delhi Police had been claiming that it had provided security to them and deployed policemen at the protest site, however, incidents of sloganeering and firing were not coming to an end.

Arifa Khan, a Jamia student, said, “These are provocative incidents where Hindutva hardliners are sending radicalised youngsters and groups to disturb the peaceful protests at Jamia and Shaheen Bagh. If the protests are baseless, as has been claimed by Union Home Minister Amit Shah, why is he mentioning Shaheen Bagh again and again and his men are sending miscreants to the protest sites?”

The Jamia Nagar police present at the spot detained the group of men for a few minutes, before letting them off.

An inspector at the Jamia Nagar police station said, “The men were asked to leave the protest site to ensure there was no skirmish. They were detained, taken to a nearby place and later let off.’

Paramilitary forces personnel have been deployed on the Sukhdev Vihar side of the Jamia campus. The police have installed body scanners on the footpath opposite to the university. The road adjacent to the footpath is open to pedestrians and vehicles. However, the machines were found to be non-functional.