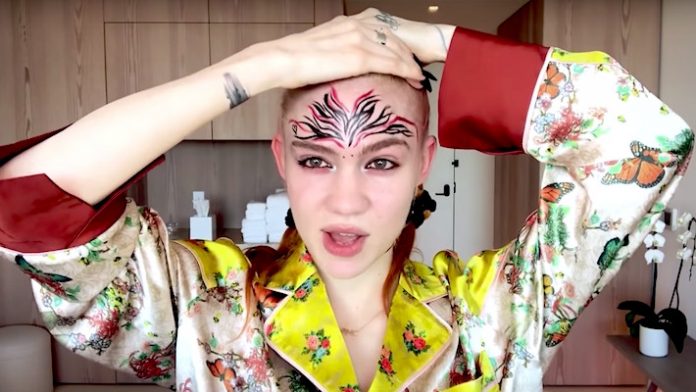 Grimes is getting ready for the release of her record Miss_Anthropocene while simultaneously undergoing her first pregnancy with Elon Musk. But even though the musician is preparing to become a new mom, she is still the same status-quo-bending, quirky artist that we all know and love. Her unorthodox nature is highlighted in a recent video with Vogue, where the singer gives a step-by-step tutorial of her funky, psychedelic makeup routine.

Grimes begins her makeup routine like most of us—with washing her face. But after misting, moisturizing, and adding serums, the process takes a turn for the weird. For tour makeup, the singer says she usually takes white “clown makeup” and goes “hardcore” by rubbing it all over her face. But for this tutorial, Grimes is sticking to more of the basics.

While Grimes’ skincare regimen is several steps, the singer said she only began it in the last year. “All my skincare stuff is something that I started doing the last year because I was like, ‘Oh sh*t. I’m 30—well, actually 31 now. Better start taking care of myself.”

Along with beginning a skincare routine, the singer says she rarely hires a makeup artist.”I pretty much always do my own makeup. Which is not necessarily a good thing because there’s a lot of pictures of me, like, looking insane. But I think I’m slowly improving at it,” something most girls who started wearing makeup in middle school can relate to. The singer also said she used to have a unibrow, but regrets plucking it away when she was younger. “That was a mistake. Because I feel like unibrows are super-cool now. If I could have it back, I would.”

After her adding a layer of foundation, Grimes’ routine diverts from the norm. The musician says she doesn’t like wearing mascara, and only places eye shadow on her lower lids. “I don’t usually put stuff under my eyes because I like having bags under my eyes,” she says. “I like looking kind of scary.” Elaborating, Grimes describes the look she usually goes for. “I like the look of being pretty but, like, ravaged by war. Like a character, Eva, in Metal Gear 3 or something. I don’t know if anyone knows what I’m talking about.”

Later in the tutorial, Grimes admits that she will allow her kid to wear makeup and bleach their hair, something she was barred from doing when she was younger. “I remember my parents wouldn’t let me dye my hair. Then I slowly bleached it over a years. I would get slightly lighter, slightly lighter and just pretend my hair was getting naturally bleached by the sun. And my parents were like, ‘Is your hair getting lighter?’ And I was like, ‘I don’t know. I don’t know what you’re talking about.’ And then, finally, they were like, ‘Okay. You’re bleaching your hair.’ I was 11 when I started secretly bleaching my hair. I have no idea what my natural hair color is.”

To complete the entire look, Grimes adds a sprinkle of glitter to her hair part. The singer then takes some eyeliner and begins drawing black and red shapes across her forehead.

Watch Grimes give her “pretty but ravaged by war” step-by-step tutorial with Vogue above.