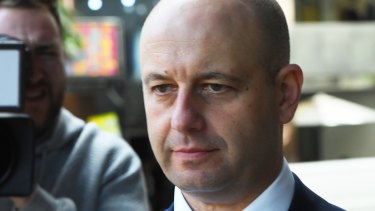 NRL CEO Todd Greenberg believes the NRL’s annual financial profit would have been “well short” of the $30 million surplus posted if not for the introduction of the ‘no fault’ stand-down rule.

The governing body confirmed the exclusive Sydney Morning Herald report that revealed it had posted an annual profit of $30.1million for 2019, down $12.7m from the previous financial year. Despite the drop, the NRL considers the result a strong one in the context of the spate of off-field incidents that prompted the 2019 preseason to be dubbed ‘the summer from hell’.

“My view is we would not have hit the numbers we have today (without it). We would have been well short. We would have had some very, very difficult times with our broadcast partners, who fund us to a very significant level.”

A breakdown of the figures show that non-broadcast totalled $203.9m, up $25.1m year on year. Distributions to the clubs, states and game development added up to $316.5m, a figure $20.5m higher than the previous year. The NRL now has $117.6m in assets in the form of cash in the bank, up from just $19.4m in 2012, the year the independent commission was formed.

The new hardline stance on player behaviour remains a contentious topic. The players’ union is fighting it on the grounds it contravenes the collective bargaining agreement it struck with the NRL, with the matter set to go to arbitration after mediation talks failed.

Some clubs have also expressed concerns that Greenberg alone responsible for sanctioning their players, believing the process should be tweaked so that he is not sole adjudicator.

Greenberg conceded consistency was always going to be a challenge because no two cases are ever the same, pointing to the unusual nature of the Josh Reynolds case. Greenberg opted not to stand down the Tigers playmaker and the domestic violence charges levelled against him were dropped on Wednesday.

“If you go back to a year ago there was a long debate around the table with the commission about how you can’t just put blanket rules in place and make policy decisions without any flexibility,” Greenberg said.

“Everyone wants consistency but every single incident is different to the last. With Josh Reynolds, he was charged with something that led to the no-fault stand-down for another player.

“But circumstances are different. So if you were sitting on the outside and just taking the peripheral view, people would say that is inconsistent. But I have always said I am much more conscious of being fair rather than consistent. You can’t be consistent on issues that are different. I know that is hard for people to understand, but Josh Reynolds had a completely unique set of circumstances.

“If we didn’t have a rule that allowed flexibility, that would have been a disaster. The ARLC deserves enormous credit for creating a new policy that provides protection for the game but also has a level of discretion when needed.”

Greenberg defended his decision to meet privately with players and that he was prepared to wear any backlash from his ultimate decisions.

“At some point someone has to make that decision and you do it through the prism of what is in the game’s best interests,” he said.

“I have copped plenty of criticism for taking meetings with individual players. I think it is really important that players who want to come forward and speak can have the opportunity to talk to me directly if they want to. I will keep doing that because I think players are our greatest asset and we have to protect them. But equally, when they do something wrong, we have to be a regulator.”