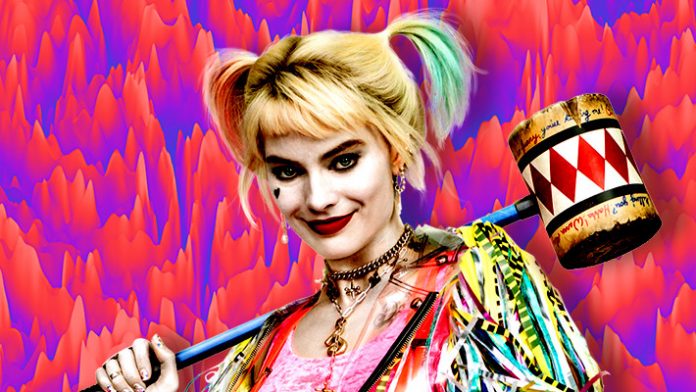 Birds of Prey is a tonal disaster and a narrative hackjob. One of its big action set pieces is set to a slowed-down dramatic cover of “Hit Me With Your Best Shot” and it’s one of those prequels that ends right where you expected it to begin, a la the closing shot of King Arthur that showed them building the round table in the background. And yet it retains throughout a certain spunky charm.

Birds of Prey (directed by Cathy Yan and written by Christina Hodson) is a little like a cinematic “Louie Louie” — composed of at least 50% sour notes but the people making it are so clearly having fun that it consistently makes you smile (also in this analogy “Louie Louie” cost about $100 million to make and The Kingsmen are a multi-national corporation).

The artistic challenge of our times is trying to synthesize all the commercially symbiotic iterations of your title character into a coherent whole, and rarely has this been as difficult as with Harley Quinn. Her live-action run began in 2016’s Suicide Squad, a movie that was disassembled and re-edited by the company who made the first trailer and since cryptically maybe-disavowed by its own director. Harley Quinn shows up as the bubbly girlfriend of Jared Leto’s Juggalo drug lord Joker, a character that himself was barely in the movie (probably for the best). Then there was a separate Joker origin story movie, Joker, which cast Joaquin Phoenix in the title role, acted like Suicide Squad and this movie didn’t exist, and became the most profitable comic book movie ever.

Now Harley Quinn is back, in Birds of Prey, which begins after she and Joker’s break up, and leaves forever ambiguous the question of which Joker this Harley Quinn had been dating. Whatever you think of DC you have to appreciate how dismissively they’ve treated Jared Leto.

What Harley Quinn the character does have going for her is Margot Robbie, probably the only actress in existence who could combine the disjointed strands of this character’s DNA into a coherent human. Harley talks like a gangster’s moll from the 40s, dresses like a theater girl with daddy issues, fights like a superhero, has a contagiously positive personality combined with a sociopathic bloodlust, and according to this movie (I’m sure this has been covered in a comic book or cartoon before but I’m not reading 7,000 words on Wikipedia to find out), is a PhD-carrying doctor of psychiatry who fell in love with one of her patients (Joker) at the asylum and then dove into a giant vat of chemicals to consummate it. Chemicals which made her… strange, I guess. Stranger? At one point the movie also reveals that she voted for Bernie. Not sure if this was before or after the chemicals. Make of this what you will.

So this character exists, and when we catch up with her in Birds Of Prey (which Harley also narrates, post-modernly) she’s just broken up with “Mr. J,” and, like Derek Vinyard when he goes to prison in American History X, now the bad guy she was partnered with is no longer protecting her from all the other bad dudes she pissed off. So virtually all of Gotham — which, as rendered here, is populated solely by cholo heavies, goombah gangsters, ethnic short-order cooks, cop movie clichés, and female mercenaries dressed like they’re about to compete in the Miss Juggalette beauty pageant — now wants to kill her. And all Harley wants to do is eat her egg sandwich. Yes, the longest, most stylized sequence in Birds of Prey is reserved for an egg sandwich.

The best thing about Joker was that it had one main character, a couple of minor ones, and a plot you could explain in a single sentence. Birds of Prey is far too overstuffed to ever make sense, but to its credit it doesn’t really try. What do these characters even want? In Harley’s case, the answer seems to be “an egg sandwich,” which you have to admit is a pretty funny character motivation.

Throughout, Birds of Prey is utterly devoid of self-importance (the perfect counter-programming to smug Marvel) and continues the tradition of loudly-stylized goth-adjacent DC films like Batman Returns (no penguin funeral in Birds of Prey but it does have a hyena). Really it comes from an even longer, prouder tradition, of theater kids wanting to dress in sexy, busy costumes and be loud.

As a storytelling exercise, Birds of Prey is mostly pretty bad, but aside from a sneaky wit and committed Margot Robbie, what it does have going for it is consistently spectacular stunts. Cathy Yan, who made her feature debut with the Shanghai action film Dead Pigs, films her stunts in such a way that she seems like she actually wants us to see them (weirdly rare these days). In a lot of ways, Birds of Prey feels like a Jackie Chan movie masquerading as a comic book movie.

Yan seems to have an innate understanding of stunts as a language unto themselves — not just as dramatic signposts or necessary story filler/slop for the piggies. She seems to know that a good stunt is like a good joke: it has a beginning, a middle, and an end, and (forgive the accidental wordplay) a punchline. In Birds of Prey, every stunt is a mini-story with a twist ending (often by way of splattering gore or broken limbs). It’s some of comic book cinema’s best action filmmaking stuffed inside one of its most incoherent plots. I don’t really know what the hell that adds up to but I know I wasn’t bored.

‘Birds Of Prey’ opens in theaters this weekend. Vince Mancini is on Twitter. You can access his archive of reviews here.