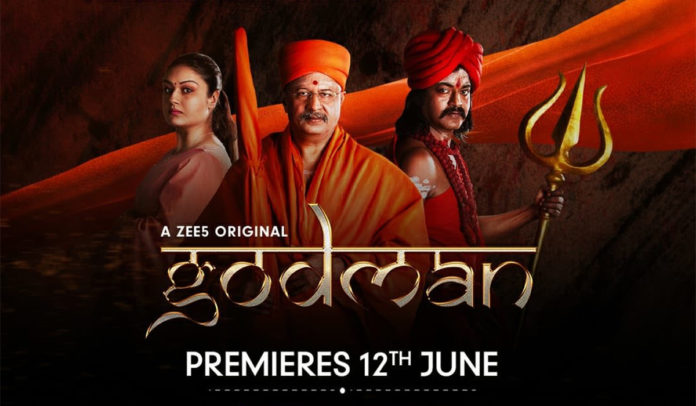 Zee 5 has been rising in prominence with its content though it faces stiff competition against the odds of Prime Video, Hotstar and Netflix. However, bad news awaits as the makers of an upcoming web series in Zee 5 called ‘Godman’.

The growing trend with web series’ in India has been to throw negative light on Hinduism in the most subtle to most dominant ways possible as a part of the plot. Right from the record breaking Netflix series Sacred Games and others like Paatal Lok, Leila the trend seems to be gripping the online streaming industry to a great extent.

‘Godman’ was scheduled to release on the 12th of June 2020.The promos of the webseries contained content which showed Hinduism and Brahmin community in bad light. Kanchi Sankaracharya is one of the eminent saints of the Brahmins community and he was likely to be targeted in the plot of ‘Godman’. Dialogues like “Which Shastra says that only a Brahmin should study Vedas? All the Brahmins who are around us are not good” have created a huge controversy. Various Hindu religious organisations have been blaming the series for blasphemy on Hinduism and insulting the Hindu deities

The teaser of this series was released last week. Controversy has emerged from the teaser as it had many abusive verses about the Brahmin community, and also had many sleazy scenes. Many people are accusing the creators of infringing on a particular community and violent scenes in the name of their creative freedom, as webseries has no censorship in India. In one scene, Daniel Balaji’s costume looks like the costume of Nithyananda who is hiding for a long time.

However, Subramaniam Swamy, a noted lawyer and political from the BJP was contacted by the Kanchi Mutt regarding possible content which could malign its image. Mr. Swamy swung into action and managed to get a stay on the upcoming webseries.

The teaser of Godman which was released has also been deleted.

“It’s become a norm for the Over the top (OTT) content providers to air anti-hindu content wrapped behind a juicy drama or humour, in the name of entertainment. It’s a tested success formula for the cultural marxists and those on the payrolls of the international jihadi-marxist nexus. The list is long and I won’t go into names of those series at the moment but the Hindu hatred is evident across all providers be it Netflix, or Prime, Alt Balaji or other myriad of content providers.
Adding to such series was an upcoming series titled “Godman” on Zee5. Zee 5 has recently had a tie up with some other content providers like the Alt Balaji for content promotion across their platforms. IMHO, Zee 5 was already a bastion of the cultural marxists even before this series was proposed but seems this tie up is going to usher in a new wave of leftist propaganda over their platform.
The series, it now appears, was subtly targeting the Kanchi Shankaracharya, among other mutts and saints of the Hindu belief system under the pretext of ‘exposing’ some frauds. Those who suspected foul play reported it to the Mutt who then approached Dr Swamy for any possible recourse. Dr Swamy, in turn, took the straight path first and spoke to Subhash Chandra ji who acted immediately upon his advice and got the series withdrawn from Zee5.
Two points:
1) The series will find some other platform to be aired, there’s no shortage of it.
2) But such action will definitely discourage them in future, as such actions hurts their pockets. So thank you very much, Dr Swamy and Mr Chandra”