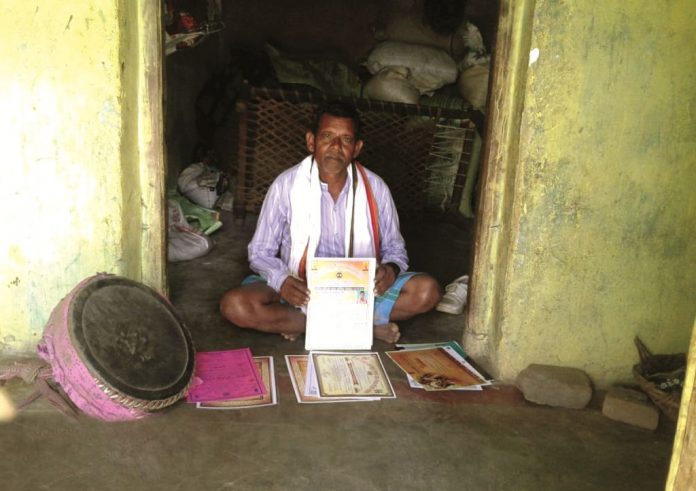 Lathor: Even as the state government provides monthly artiste pension of Rs1,200 to traditional artistes to preserve folk-art forms, Ganda badya artistes in Bolangir district are deprived of financial support.

One such folk-artiste of Banjipali village of Kuibahal panchayat under Tureikela block named Kanistha Kumbhar said, “It has become tough for us to manage our household expenses as this traditional folk-art form has become obsolete and people prefer loud DJ music instead of Gonda badya. A Ganda badya artiste earns maximum Rs 10,000 in a year”.

Being deeply moved by his musical performance, several social organisations and government bodies have honoured him with 13 merit certificates. Now, those certificates are of no use, he added.

In a situation, where some of the old artistes strive hard to keep this tradition alive, youngsters prefer to go out of Bolangir district to work as bonded labourers. Facing the challenge from DJ music, many such families have given up their traditional occupation, they added.

Notably, this traditional folk-art form has been vanishing from society due to lack of government support. The artistes who were then performing on demand for marginal remuneration have been gradually switching over to other occupations to eke out their living.

While it is commonly assumed that traditions have linkages only with ancient history; many traditions are invented by human societies on purpose whether those are social, political, economic or cultural in nature.