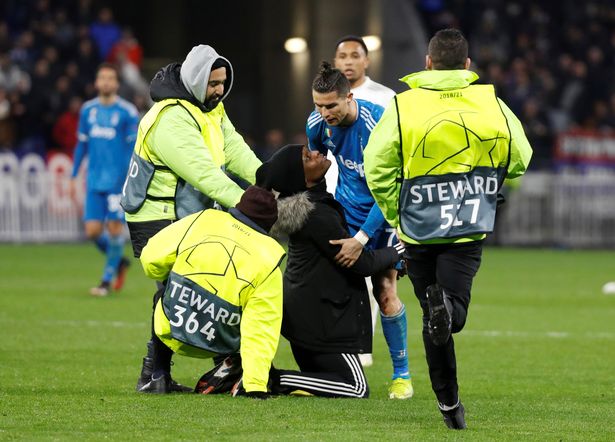 Cristiano Ronaldo was far from amused when he was confronted by a pitch invader during his side’s 1-0 defeat to Lyon in the Champions League.

Lucas Tousart’s 31st minute goal gave the French side a surprise win against the Serie A leaders, and with Juve unable to score an away goal the tie is very much in the balance ahead of the second leg in Turin on March 17.

Ronaldo was not at his best during the encounter at the Groupama Stadium, and he did not take kindly to a supporter running on the pitch and embracing him.

The fan managed to evade security and make a beeline towards the Portuguese star, but he responded by pushing him away and wagging his finger.

Despite two stewards then springing into action and trying to grab the invader he managed to escape them again, and fell to his knees while hugging Ronaldo by the waist.

Eventually he was dragged off, but Ronaldo was likely to be left wondering how the marauding fan was able to make it so far without being apprehended.

This is not the first time a spectator has attempted to get to Ronaldo while he is in action.

During a game between Portugal and Holland in 2018 a young supporter attempted to give him a kiss on the lips, while in a separate incident in December a pitch invader grabbed him by the neck after Juventus ‘ Champions League win over Bayer Leverkusen. 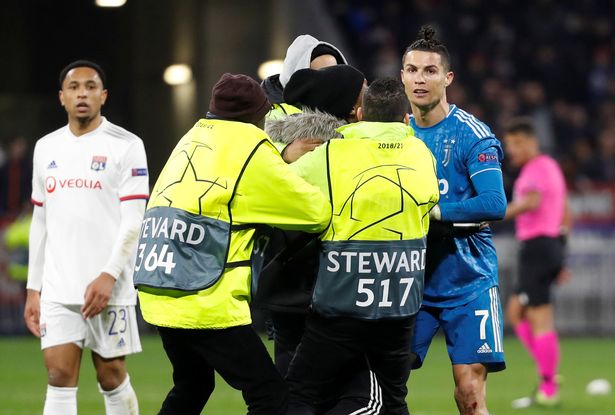