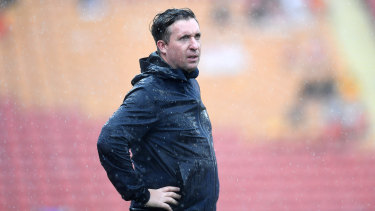 Brisbane Roar coach Robbie Fowler is banking on home form to put his club firmly in the hunt for the A-League finals.

The Roar host Adelaide United on Saturday in what is the first of seven home matches in their remaining 11 regular season fixtures.

A run of just one defeat from their past six matches has put the Roar on the verge of the top six and Fowler believes home advantage will be crucial to his hopes of reaching the finals in his first season at the helm.

“We have got a lot more home games than we have got away games,” he said.

“That puts us in a little bit of a better place.

“I’m not saying you’re guaranteed results just because you’re at home, you’ve still got to go out there and earn that right to get the three points.”

Last weekend’s 1-0 loss to Sydney FC has left the Roar in seventh on the ladder, two points behind sixth-placed Western United having played a game less.

Adelaide are fifth after their 3-1 win over Melbourne City last weekend and Saturday’s match represents a big chance for Fowler’s Roar to close the gap on the Reds.

To do so, they will have to overcome the loss of experienced defender Scott Neville, suspended after being sent off against Sydney.

Ex-Adelaide centre-half Daniel Bowles is likely to step in as Neville’s replacement although Fowler hinted teenager Kai Trewin could also come in to his starting XI.

A week after signing for Adelaide following his release from the Roar, Stefan Mauk has been included in Gertjan Verbeek’s squad and the midfielder’s addition is a bonus with Nathan Konstandopoulos facing a lengthy stint on the sidelines after rupturing his right anterior cruciate ligament in training.

With George Blackwood (calf) also unavailable, the Reds have named an extended squad which includes 15-year-old Mohamed Toure, the younger brother of Olyroo Al Hassan Toure, though it’s unclear if the teenager will travel with the team to Brisbane.