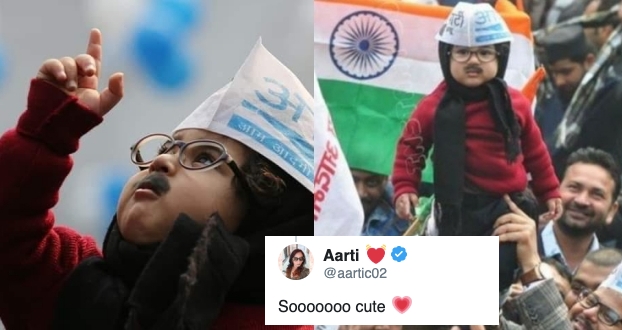 The one and only Arvind Kejriwal , who has been a harcore Dilliwala and winning the heart of Delhiites has won today defeating BJP which is able to grab only 8 seats and Congress with nil.

AAP took to its Twitter and shared an adorable picture of ‘little muffler man’. In the picture, a kid can be seen wearing a cap showcasing the party’s name along with spectacles, a muffler, and a painted moustache .

With the post of the picture , it went viral within no time. Till now people have been in an amusing mood , regarding the looks of the Delhi CM and imitate the way he speaks but after the win of AAP , the picture is just breaking the internet .

Netizens are just giving their compliments to the mini avatar of Kejriwal , who is just lovable …

Let’s watch this adorable one too :

ANI too posted on Twitter and captioned it : “An Aam Aadmi Party (AAP) supporter reaches Delhi Chief Minister Arvind Kejriwal’s residence with his children. Counting for all 70 assembly seats in Delhi to begin at 8 am.”

The pictures of the little lovable kiddo is winning hearts more than the real Kejriwal and grabbed 18.4K likes and 2.5K retweets .