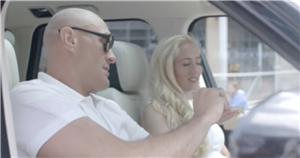 Tyson Fury has had more than his fair share of ups and downs since he was born 31 years ago.

The Traveller was born three months’ premature and given little hope of survival yet grew into a 6ft 9in heavyweight champion of the world.

His win over Wladimir Klitschko in 2015 should have been the pinnacle of his career but instead it signalled his downfall as he slipped into a three-year drink and drug-fuelled depression.

Fury recovered however and shed 10 stone to return to the ring in 2018 before earning a controversial draw with world champion Deontay Wilder .

Now, ahead of his rematch with his American rival, Fury is the star of an ITV documentary which takes a look behind the scenes at the heavyweight’s life and times.

Here are five things we noticed from the show…

1. Down-to-earth Fury still does the chores

He may be a multi-millionaire and a former world champion, but that doesn’t mean Fury is above taking out the bins.

When he’s not training or fighting in Las Vegas, Fury lives in Morecambe with his wife Paris and their five children.

And that means he’s often running around doing the chores.

He said: “Nappies, nappies, s***** nappies.., when I’m out performing being Tyson Fury I’m a different person but when Tyson Fury is at home, Tyson Fury is doing the bins.

“Tyson Fury is everything that every other husband, father, son and brother is. One thing i can’t stand is rubbish and untidyness.