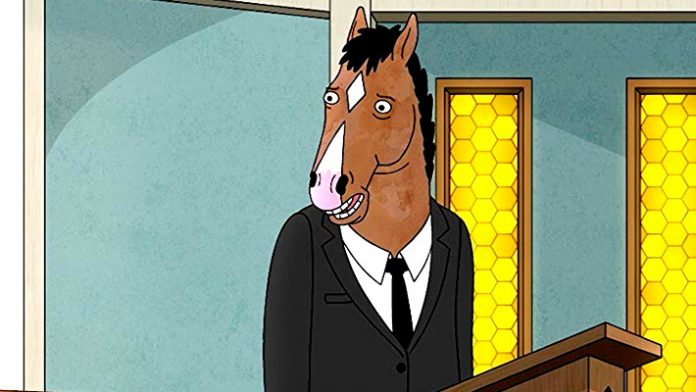 Even though it’s my favorite show of the 2010s, and my second favorite show ever, it took me two weeks to watch the final season of BoJack Horseman. I was not ready to say goodbye to BoJack, to Diane, to Todd, to Mr. Peanutbutter, to Princess Carolyn, to Pickles, to Officer Meow Meow Fuzzyface, to Character Actress Margo Martindale, to Hollyhock Manheim-Mannheim-Guerrero-Robinson-Zilberschlag-Hsung-Fonzerelli-McQuack, and especially to Vincent Adultman. BoJack, both the character and show, brought me so much happiness and sadness (but, like, the good, cathartic kind) that I wasn’t ready to say goodbye — once I finished those final eight episodes, there would be no more Todd schemes to look forward or one of Diane’s depressive spirals to dread (which is to say, relate to). But after two weeks of the final season being out in the world, and multiple near-misses of having it being spoiled for me, I finally pressed play.

Here are the five stages of grief (shoutout to Elisabeth Kübler-Ross, whose BoJack name would be something like Elisabeth Kookaburra-Ross) I went through in saying goodbye. This is for BoJack Horseman, but it could apply to any favorite TV show.

Every old show comes back in some form. Friends is getting a reunion special. Roseanne turned into Roseanne 2.0 which turned into The Conners. A Gossip Girl spin-off is part of HBO Max’s programming block. Walker, Texas Ranger is now Walker. If Alf is able to return from Melmac, in Pog form or otherwise, then the BoJack reboot will certainly be announced any day. I’d even settle for a new Horsin’ Around special.

Why did BoJack Horseman have to end when there are so many anonymous and/or bad shows on Netflix? This shouldn’t be. Would anyone really protest if 13 Reasons Why (here’s one reason why this show should have ended after season one: it’s not good), Lost in Space (I prefer the movie with Matt LeBlanc, thank you very much), What/If (now we know the answer to “what if a show with a two-time Oscar winner premiered and no one cared?”), V Wars (literally never heard of this, and it’s my job to cover television), Locke & Key (keep the door shut, I say!), After Life (I can’t wait until after it’s canceled), I Am Not Okay with This (I am not okay with this show), and The Boss Baby: Back in Business (actually… this one is good) all went away? I’m pissed that Netflix won’t cancel those shows and use some of that saved money on one more season of BoJack.

If you bring back BoJack Horseman, I’ll watch two minutes, enough to count as a view, of every Netflix movie that comes out. Yes, even Bright 2. Just 10 more episodes, that’s all I’m asking. Oh yeah, and bring back Tuca and Bertie, too.

A few years ago, I started running (this is going somewhere, I swear). Training, marathons, buying unnecessarily expensive watches, the whole deal. One thing that my running coach advised me to do early on was find my mantra. Not a mantra, but my mantra. As someone who associated mantras with bumper stickers and the kind of people who wear shirts that say “run now, wine later,” I initially dismissed the suggestion. Until I watched the season two finale of BoJack, the one where BoJack runs up a hill… only to collapse when he reaches the peak. While catching his breathe on the ground, covered in sweat (do horses sweat?), a baboon appears from above and tells BoJack, “It gets easier. Every day, it gets a little easier. But you gotta do it every day. That’s the hard part. But it does get easier.” I found my mantra. I wore a rubber bracelet with that quote on it when I ran a sub-3:30 marathon, something I never thought I’d be able to do.

The reason I bring this story up — except to brag that I ran a marathon, no big deal — is to highlight the impact BoJack Horseman had (that past tense still hurts) on me. I’m not the only one. There are many personal essays about how it helped people get through hard times, whether the struggles were with addiction, sexual identity, or mental health, and unlike most personal essays, they’re worth reading. There’s often a sense of humor to them, which is in the spirit of writing about a show where a main character overdoses on heroin… in the same episode where someone says the following sentence: “One time, I didn’t want my friend to move out, so I used character actress Ann Dowd to help me sabotage his hip-hopera.” BoJack Horseman was somehow the funniest and saddest show on TV, and although I miss it dearly, the hurt gets a little easier every day.

Now, if you’ll excuse me, I’m going to take a shower, so I can’t tell if I’m crying or not.