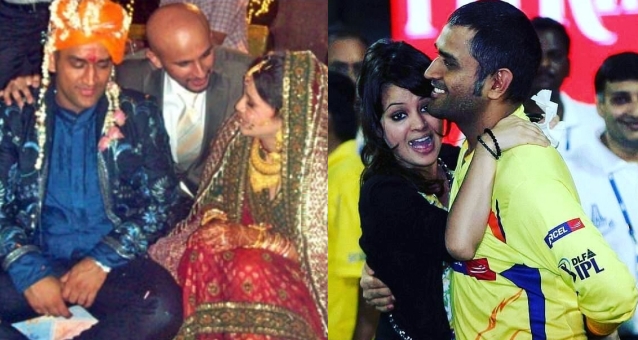 The love story of Sakshi and MS Dhoni started in 2008 during the internship of her’s at a renowned 5 Star hotel. They dated each other for almost 2 years and that too not publicly . Their relationship was a hidden one but it did catch the media’s eye and all started talking about the couple .

How can we forget the biopic of Mahi , “MS Dhoni: The Untold Story”, where Dhoni was portrayed by Sushant Singh Rajput. It revealed the insights of the personal and professional life of the batsman . The love story of the adorable couple started when Dhoni liked Sakshi much more as a human being for her innocent nature and not only as his fan . The movie was a big hit .

In a post on Instagram, Sakshi shared a picture of herself with Sheethal and Robin Uthappa and wrote that he was the reason why Mahi and she started dating in the first place.

She quoted about the post:
“Thanks to this man here Mahi n i r together!!! It was great meeting u Robbie and Sheethal … Thank u guys for coming and lot’s of cuddles to the lil one ! And Sheethal you looking HoT as ever! And just to clear out to people mahi n r not childhood friends n first time i stepped into Ranchi was after marriage”

Sakshi cleared all the myths of the people who actually assumes that Mahi and Sakshi are childhood sweethearts, instead they met and fell in love with each other .

That’s a sweet love story with a fruitful ending …