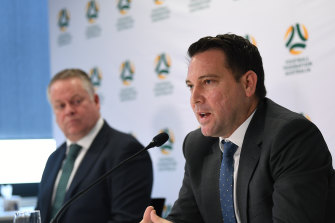 Football Federation Australia and the A-League clubs, now in control of the nation’s premier soccer competition, will suffer a body blow from the partial shutdown caused by the coronavirus crisis, but FFA is not planning to appeal to governments for financial support as yet.

James Johnson, FFA’s newly appointed chief executive, says soccer is still evaluating the potential impacts the chaos being wreaked by the virus will have, but at this point there is no plan to appeal for government support, with the sport more focused on trying to keep the show on the road at the elite level and on the welfare of those who are – and aren’t – playing.

“There will be a deficit, of course there will be. We are still trying to work out the financial effects and where they will hit most. That is why I can’t give a number at the moment,” Johnson said.

“All our efforts are being directed at other priorities, which is to work out and continually monitor the protocols of how games can continue until the end of the season and the finals.

“We are working with government but the priority from day one has been to protect our players, participants and fans, and also be good public citizens in trying to prevent the spread of the disease.

“We will get to that when all of the other issues have been dealt with.”

FFA has historically generated millions of dollars from the A-League finals series, as it has kept receipts from these games, not the clubs.

That arrangement has changed this season as the clubs are running the league so FFA’s shortfall from missed income will not be quite as great, but it will still be felt.

FFA received a big cash injection last year from the licence fee paid by Western United – reportedly around $18.5 million – to gain a place in the league.

But it has also lost key sponsors since then and there have been reports that broadcaster Fox, which has provided the bulk of cash to underpin the A-League, is looking to either get out of its contract or leave when it expires.

One side effect of the Australian league carrying on when virtually all those around the world have closed is the fact that it will be available through traditional broadcasters who take the Fox coverage, as well as streaming services and on YouTube.

Clubs and officials hope that the fact their games are almost the only ones in the world available will help spur interest in the A-League now and in the future.

“We hope that more people will watch around the world and at a very difficult time it will give sponsors of our clubs some exposure and create value for the league,” Johnson said.

“We have got 1.96 million people [participants] not playing football at the moment, so it’s important that they can watch their heroes on TV. I think there will be a social benefit to the community through this fan engagement.”