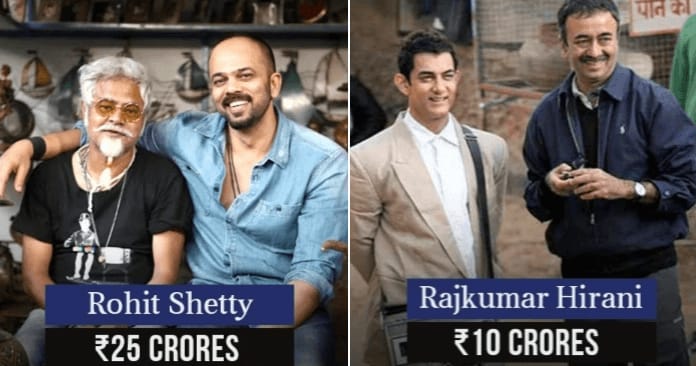 What do directors do? The director of the movie is a captain of the ship who is in charge of where the ship is going. The film script on the paper is now the vision of the director and it depends on how he is thinking to execute it.

In general, it is the director’s work to make decisions regarding the film.

The job of the director is certainly not easy, and it requires a lot of effort and time to create set pieces and make the film as directors think.

However, producers pay directors for the movie and it depends on how successful a director is with his filmography.

Here, we enlisted a few big directors of Indian cinema and how much they charge for directing the movie of their kind from producers. Some directors are charging more than 25 crores rupees for a single film.

Farhan Akhtar is one of the talented directors in Bollywood. He started his career as a director with Dil Chahta hai, which becomes a cult classic in Bollywood movies.

He is famous for bringing fresh stories in Bollywood. Later on, he gave us gems like Lakshya, Don, and Don 2. It is said that Farhan Akhtar charges 4 crores as his fee for being in the director’s chair.

There’s a trivia about director Kabir Khan that he was making documentaries for years before he made New York starring John Abraham. His works were acclaimed by movie producers and audiences as well.

Later on, he directed Ek Tha Tiger and went on to do more big-budget movies starring Salman Khan. Now he is one of the most trusted Bollywood directors and coming with Kapil Dev’s biopic 83.

Anurag Kashyap has made a separate fan base for his type of movies. He is also loved by producers as he has the talent to make a good movie economically.

Anurag Kashyap is a talented director who had gained fame internationally. His original film’s rights of Raman Raghav 2.0 were sold to the Russian film industry.

Over a period of time, Mani Ratnam had gained an unexpected fan following in all the industry. He is a master director who knows how to make the audience excited skillfully.

The producers wouldn’t mind paying Mani Ratnam whatever he asks as the man delivers perfection every time he sits on the director’s chair.

Karan Johar is very popular as a director and known for his typical movie-making experience. He brings the list of double-digit director’s club. His movies are always larger than life and based on the complexities of romantic relationships.

His notable works include Kuch Kuch Hota hai, Kabhi Khushi Kabhi Gham, My Name is Khan and Student of the year. He also charges a whopping fee for hosting Celebrities talk show Coffee with Karan.

Rajkumar Hirani, famous by the mane of Rahu Hirani is one of the most talented directors in the Bollywood. He has made movies like Munna Bhai series, PK, 3 idiots, and now Sanju.

All of his movies are blockbusters and fans’ favorite. Producers don’t mind paying him 10 crores as he delivers success every time.

AR Murugados is very popular for his notable works in the south industry. He has made several Bollywood films and his vision was always appreciated.

For example, Gajani starring Aamir Khan was a big hit after its release. Sources said, he usually charges a huge amount of 12 crores to direct a film.

S Shankar is a big name in the south industry. He is the man behind Robot and Robot 2.0. He is also very successful in directing Hindi movies as well. He has directed Nayak which became a cult hit in the Bollywood.

I won’t believe if any producer will ever say him no if he charges any amount as his filmmaking fees.

Rohit Shetty was often criticized for his direction style but he knows his audience well. He is the highest-paid actor in Bollywood. He usually does comedy films but he is the man who started the cop universe in the Bollywood industry.

SS Rajamouli who created the Bahubali series is the highest-paid actor in Indian cinema. It is reported that he charged a wholesome of 100 crores to direct Bahubali the conclusion.

And watching the movie, you would probably say that he deserved it.