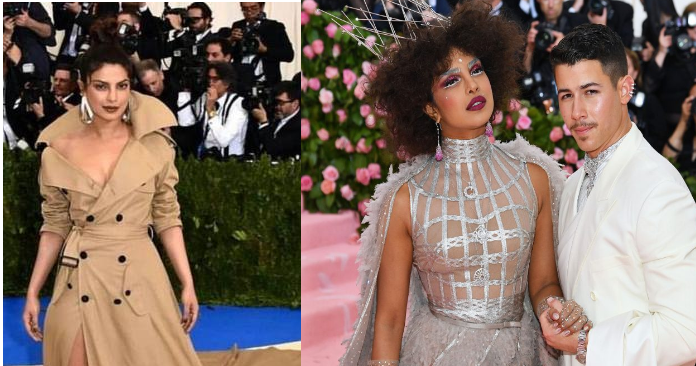 Priyanka Chopra has made her name and fame globally with her charming persona and dazzling acting career in both Bollywood as well as Hollywood. However, this fashion girl has suffered a lot of backlashed and criticism for her dressing styles and the choices she made to wear for a special occasion.

1. Grammy Red Carpet Outfit of Priyanka Chopra is a recent trend and meme material on the Internet

The internet is all crazy about the Grammy outfit Priyanka
had selected for the red carpet. It was stunning though, as Priyanka looks
pixie-like in the Ralph and Russo gown that has a plunging neckline. However,
fans find this dress too much revealing and backlash her for being anti-cultural
with such a sense of dressing.

This 37-years-old actress has revealed that the Designer has
taken care that she must not suffer any wardrobe malfunction with her choice of
dress. She revealed that a piece of Tulle matching to Priyanka’s skin tone was
attached to a dress that was invisible to the camera.

This incident had happened while she was attending the 77th
edition of the Golden Globe Awards with her newly-wed husband Nick Jonas. She
chose to wear a partially transparent black dress for the occasion and it
definitely worked as she got much attention from the media and paparazzi who
were waiting there for Mrs. And Mr. Nick Jonas with their camera ready.

While stepping out, Priyanka Chopra got a little
uncomfortable with her dress and tries to hide this with her handbag to avoid
any type of wardrobe malfunction. She managed well and escaped the media
however such see-through dresses really not work well with the actress.

3. Priyanka Chopra wears a see-through skirt for a stage show for the event launch of ‘I can’t make you love me’ in Mumbai

In the event launch of the movie ‘I can’t make you love me’
in Mumbai, Priyanka appeared on stage wearing a chic net skirt and cropped tee.
The actress was looking super cool and appealing – until the stage lights went
on and her skirt turned see-through revealing a lot of her undergarments.

Priyanka didn’t realize what had happened and she continued
to pose for the camera. She might know in the morning newspaper that what she
had done with her dressing sense.

Met Gala is one of the huge international platforms for both
the celebrities and designers who dress them. In this red carpet event,
Priyanka appeared in a dramatic caged dress that has cascading rainbow
feathered skirt and cape.

Priyanka Chopra became the meme material for appearing like
this on the Met Gala event. Her dress made several jokes and headlines for the
newspaper around the globe. However, Priyanka never takes these backlashes and
seems to correct it. She wears what she finds good on her without caring about
how people will react to it.

5. Priyanka Chopra reveals too much in her backless leather black dress at a guest Party Abroad

Priyanka Chopra becomes the headlines when her party pics
were uploaded online for the fans. She appears in a black leather dress for a
party event. The dress was backless. And accidentally that dress revealed too
much instead of just exposing her back.

During the red carpet event of a TV channel party, Priyanka
attended the party wearing a see-through blacktop. The top reveals most of her
undergarments. And she was criticized for her absurd dressing sense on the
internet.

These are the few wardrobe malfunctions we find on the
Internet. If you some more, then you can mention it in the comment box.