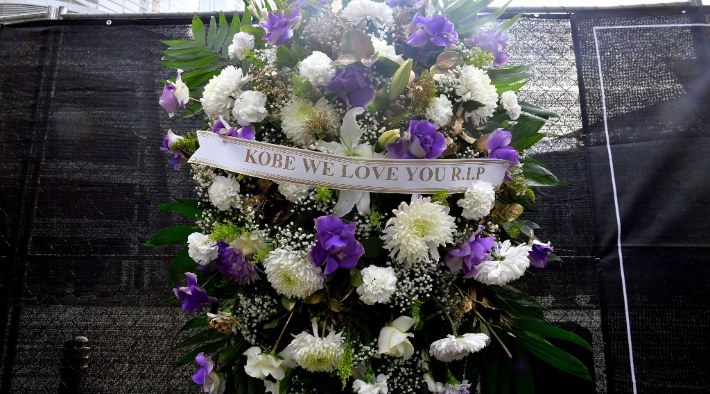 Fans in Los Angeles are mourning the death of Lakers legend Kobe Bryant by assembling near the building where he carved out a legacy as one of the best basketball players to ever live. According to multiple people in of Los Angeles, those in the area looking to honor Bryant after his passing on Sunday morning gathered in L.A. Live, the entertainment complex adjacent to the Staples Center, for an impromptu memorial.

Fans were unable to gather right at Staples due to the Grammys, which take place on Sunday evening in the building and has been closed off for the event. One fan picked up a bouquet of flowers, which he then brought over to the plaza.

The man who set up is flowers is named Gabriel Paredes. He heard about the news while driving in Hollywood. Went to a flower shop and had them make the bouquet, then came straight here

He said: “We’re in shock. These are things no one is expecting. I’m shaking.” https://t.co/YgLRtS2K25

Other memorials included a fan bringing a piece of Bryant-inspired artwork and those in attendance cheering in memory of the retired Lakers star when a graphic was put on a video board.

Bryant, 41, died in a helicopter crash in Calabasas. There were no survivors, and according to Adrian Wojnarowski of ESPN, Bryant’s daughter, Gianna, along with one of her teammates and one of their parents, were also on board. The reactions to Bryant’s passing, which comes one day after LeBron James passed him on the NBA’s all-time scoring list, have extended far beyond the world of basketball.