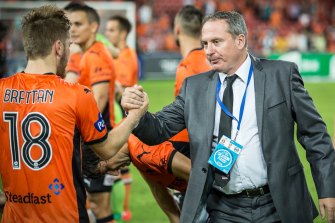 A-League boss Greg O’Rourke insists there is no cause for concern at incoming expansion club Macarthur FC despite a concerning turnover of key personnel, which continued with the departure of football director Ken Stead.

High-performance guru Stead, who worked closely with Ange Postecoglou during his successful tenure at Brisbane Roar, was appointed in October to a wide-ranging role at the head of Macarthur’s football department.

Football director Ken Stead has been made redundant at Macarthur FC.

Trumpeted as a “major off-field signing” at the time, Stead was to have oversight of not only the A-League team but all academy and community football structures beneath it.

But his role was made redundant this week, club sources said, in the latest round of behind-the-scenes changes at the Campbelltown-based club.

O’Rourke told the Herald “everything’s fine” at the club, describing Krayem’s resignation as a natural consequence of Walker’s decision to exit as a shareholder. Walker, however, remains attached as a five-year major sponsor of the Bulls.

Macarthur FC was conceived after two rival expansion bids from Sydney’s south-west joined forces – one of them led by Walker, the other by Gino Marra, who has become the new chairman.

“When they were building the ownership structure, they had a plan, but when Lang came on, he said as part of his conditions of being a 50 per cent investor that he wanted his owner leadership team,” O’Rourke said. “When he left, they went back to plan A, and that didn’t include the people brought together by Lang.”

Marra would not comment when contacted by the Herald.

Stead was an appointment made by Krayem, one of three Walker-pointed directors, who told the Herald that “change happens” in football.

“It’s a simple change of ownership … I was appointed as a Walker director. The new owners, they can appoint their own board,” Krayem said.

Macarthur, who will be coached by Matildas boss Ante Milicic, have only officially confirmed the signing of one player, Tommy Oar, but are believed to have several others locked in that they are unable to announce due to agreements with rival clubs.

The A-League can ill-afford for a second expansion club to hit rough waters. Western United have endured a difficult first season in the competition as they await construction on their proposed stadium, with average crowds of around 5,000 at multiple venues scattered across the western part of Victoria.