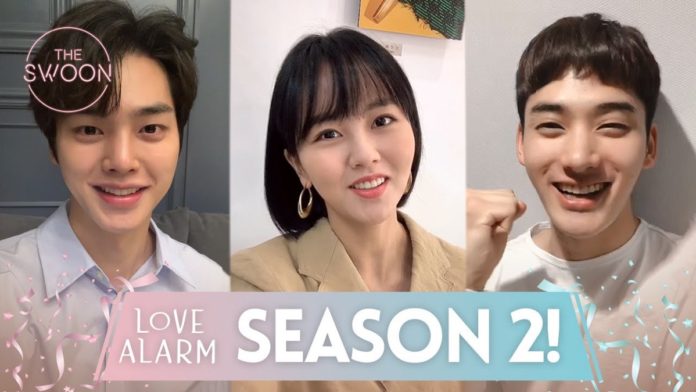 Love Alarm is a South Korean drama series, the series is based on the Daum webtoon of the same name by Chon Kye-young. The series premiered on Netflix on 22nd August 2019, with eight episodes and a running time of 42-56 minutes. The first season was a huge commercial success becoming one of Netflix’s top releases of 2019. The show was renewed for a second season on 29th October 2019.

The show revolves around a disruptive technology that enables users to discover love through an app that notifies whether someone within the 10-meter radius has romantic feelings for them and since the app syncs with the user’s heart it is impossible to hide one’s feelings.

The cast from the first season will be reprising their roles, the cast includes

The first season ended with Jojo running into Sun-oh and Hye-Yeong both who evidently still have feelings for her. The season will also explore Hye-Yeong and Yook-ji’s relationship with the former still having feelings for Jojo. It also remains to be seen how Brian Chon was introduced as a developer of the app and if he is actually the developer then how could Cheong Duk Gu give Jojo a shield for her love alarm.

There are various theories that Duk Gu who had disappeared without a trace in the first season might be Brian Chon, giving himself a new identity while others debate that he is a member of Anti-Love Alarm movement. We also have to see if Jojo can actually meet the developer of the app and get her shield removed. Amidst all this chaos a new feature on the app is being rolled out, will this new feature lend any help to the couples or only create more problems remains to be seen.