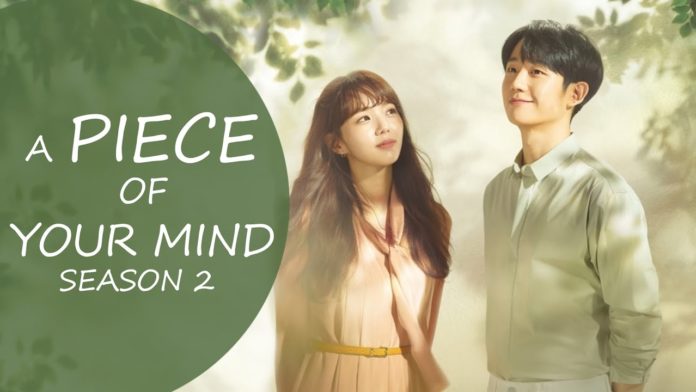 A Piece of Your Mind is a South Korean television series written by Lee Sook-yeon and directed by Lee Sang-yeob. The series premiered on tvN from 23rd March to 28th April, 2020. The first season consisted of 12 and the running time was 70 minutes.

The show revolves around the characters of Moon Ha-won and Han Seo-woo. Moon Ha-won is an AI programmer and also the founder of AH Company, he is still stuck in his past and struggles with his unrequited love for Kim Ji-Soo. Han Seo-woo is a classical music recording engineer and despite facing many difficulties all through her life she manages to maintain a positive outlook. Here is the updated information about A Piece of Your Mind season 2 from Winkreport!!

A Piece of Your Mind Season 2 Release Date

The season 1 was originally supposed to be of 16 episodes but it was eventually cut down to 12 episodes as a result of declining viewership ratings. Despite this, the fans of the show have been vocal in their demand for a second season. Though there has not been an official announcement yet there is a possibility that the show might be reprised for a second season. Though if that happens it is likely that the second season will be released by the end of 2021.

A Piece of Your Mind Season 2 Cast

Most of the cast from the second season is likely to reprise their roles, the main cast of the series includes

A Piece of Your Mind Season 2 Plot

In the finale episode, we witnessed each character finding their own sense of closure. The confrontation between Ha-won and In-wook each unleashing years of anguish onto each other. Ha-won is angry for the role In-wook played in his mother’s death and also for the implication by In-wook to Seo-woo that no one can ever come between Ha-won and Ji-Soo. While In-wook resents Ha-won thinking that the woman he loved all his life always chose Ha-won over him. Just as Ha-won finds his closure saying goodbye to his mother and letting go of Ji-soo which came in the form of leaving a letter for In-wook. The letter was the closure In-wook needed as it was written by Ji-soo in which she reveals that she has forgiven her husband for what happened in the past and wanted to be there for him. That was all In-wook needed to know that his wife loved him. His final closure was talking to AI Ji-soo and revealing his feelings. Finally, Ha-won and Seo-woo get together. If there is a second season it is likely to explore more of their relationship.

A Piece of Your Mind Season 2 Trailer