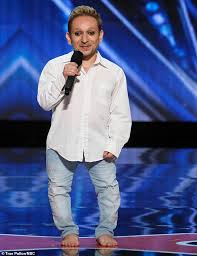 Alan Jones Silva is an aerialist set on proving size does not matter! His performance will leave you in awe of his skills, it’s like the man is literally flying through the air!  Let’s see what else we know about this amazing aerialist.

Photoshoot in the desert

Alan is married and has two children, a daughter and a son.

Alan is the 6th generation of a traditional circus family. He started training at the age of 4 along with his father and grandfather. He made is debut at the age of 6 in the circus doing floor acrobatics and as a clown. He learned Trapeze by the age of 10 and performed it for 3 years after which he began performing Maromba. But his love for being in the air made him change his act to an Aerial Acrobatic Flying Skills.

Alan was invited to audition for a new Cirque du Soleil Show during that time he suffered an injury breaking his hips. He made a full recovery and in 2003 was joined to join Cirque du Soleil’s new production called Zumanity. In the show, Alan plays a character called Tissues, flying through the air. He has also worked as a coach for Cirque de Soleil.

Alan’s brother Alfredo Silva is a knife thrower and was a participant of America’s Got Talent Season -11 part of the duo called Deadly Games. Alan during his auditions revealed that his brother is the reason he choose to audition for AGT, claiming “I saw what AGT did to my brothers a couple of years back.”

Alan is a TikTok star with 107.6K followers as of today. He posts videos of himself doing aerial moves at home and also funny lip syncs.

His dream is to have his own act in Las Vegas.

America’s Got Talent show’s audition was the first time Alan was performing infront his wife and kids. During the performance Alan’s son cheering him on ‘Go Papa,’ was the cutest thing ever. Alan performed an aerial act containing dangerous drops and spins, all without the safety of a net. His routine was set to the song Alive by Sia, at the end of the performance all the judges clearly wowed by all that he did gave him a standing ovation. Receiving a Yes from all four judges, he cleared the auditions and is all set to perform in the next round.