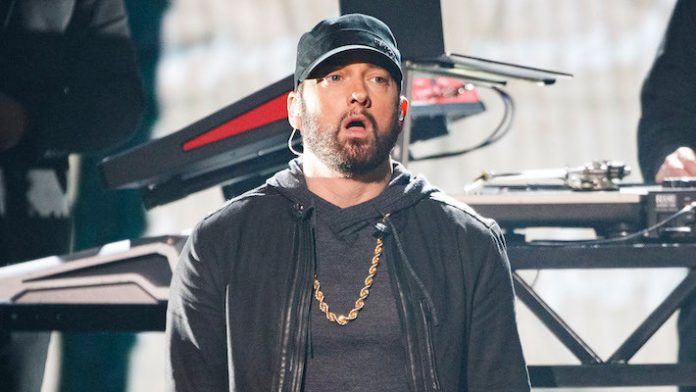 Eminem’s ‘Lose Yourself’ sales increased almost 2,000% after his surprise Oscars performance, according to Billboard, which reports that the 2002 8 Mile standout sold 4,000 downloads in the US. His overall catalog sales increased over 300% thanks to a combined 7,000 downloads on February 9 compared to only 2,000 the day before. It looks like there were quite a few fans feeling nostalgic after the performance, which was originally planned for the 2003 Oscars ceremony until Eminem refused to perform. His second chance seems to have given him a big sales boost, making it worth the wait for him.

“Lose Yourself” was nominated in 2003 for Best Original Song, but Em refused to perform a censored version of the song live, then skipped the ceremony altogether, reportedly believing that there was no way he’d win at such a buttoned-up affair. He turned out to be wrong and “Lose Yourself,” which was by then Eminem’s first Billboard Hot 100 No. 1 single, became the first rap song to win an Academy Award as well. It would eventually remain on top of the chart for 12 weeks and was eventually certified diamond by the Recording Industry Association of America (RIAA). So while it certainly didn’t exactly need the boost, it’s another impressive accolade to add to the list.

Naturally, all of the other songs performed last night also received big bumps in their sales totals over the day before. Combined, they totaled around 423% thanks to 5,000 downloads, up from the 1,000 they’d sold the day before. Em’s ability to nearly outperform all five by himself just speaks to his continued dominance as a pop culture figure.