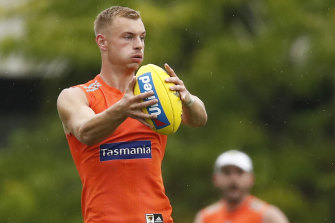 Hawthorn have moved quickly to lock in one of the AFL’s emerging young stars, handing James Worpel a two-year contract extension.

James Worpel, playing in the Hawks’ intra-club match on Friday, has signed a contract extension.Credit:Getty Images

“He is a fantastic young man and is really highly thought of by his fellow teammates as well as the coaches and staff at Hawthorn. We look forward to a long future for James at Hawthorn.”

Worpel’s value rose last year when he accepted the responsibility of being a key midfielder in the absence of the injured Tom Mitchell. He played 22 matches, averaging almost 27 disposals. Only AFL legend Leigh Matthews had won the Hawks’ best and fairest at a younger age.

The Geelong Falcons was taken with pick 45 in the 2017 national draft. He debuted in round six of the following season and played in all the remaining matches.

Worpel played well but Mitchell was the stand-out in Friday night’s intra-club club clash at Waverley. In a successful return from a broken leg, Mitchell found plenty of the ball, having 21 disposals in three quarters of football.

“I thought Tom went really well. He found the ball, which we know he does. He was involved in a lot of tackling and general contested situations, which he needs to get more and more of, and games are the best way to do that,” Wright said.

Jonathon Patton, the former Greater Western Sydney forward, booted three goals, Mitch Lewis was impressive and booted two goals in the second half in his return from shoulder surgery, while Chad Wingard provided dash through the midfield. However, young forward Jacob Koschitzke left the field in the third term with a shoulder injury.

The Hawks open their Marsh Community Cup series against St Kilda at Moorabbin on Thursday night.