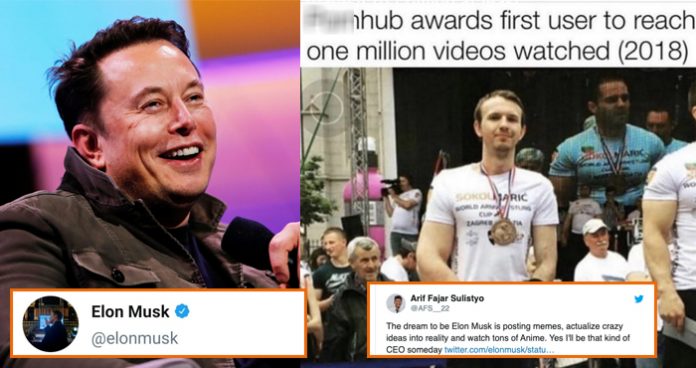 The multibillionaire founder of Tesla and SpaceX, Elon Musk, is very active on the micro-blogging site Twitter, where he is ruling the hearts of many with his wit and hilarious sense of humor. He often takes out time from his busy schedule and interacts with his fans. His Tweets never fail to go viral on Twitter because of the fun factor in them.

Recently, Elon Musk left everyone in splits after he shared a hilarious and crude internet meme about mastu*bation with a hilarious caption on it. In his tweet, Elon Musk shared a picture of a man having an extremely muscular right arm and sporting a medal.

What caught everyone’s attention was the left arm of the man. While the right arm of the man looked extremely muscular, on the other hand, his left arm looked weaker than the right one. The image was accompanied by a text that read: “Po*nHub awards first user to reach one million videos watched (2018)”

The tweet soon went viral and was flooded with hilarious reactions from Twitterati on it. People came up with even funnier responses to the tweet. Many of them even hailed Elon Musk for his sense of humor.

this is literally the same guy who created the coolest electric cars on the planet and i will never be over it https://t.co/MlJzHZ3kKu

The dream to be Elon Musk is posting memes, actualize crazy ideas into reality and watch tons of Anime. Yes I’ll be that kind of CEO someday https://t.co/mRYJVZtc7o

He is not left-handed too pic.twitter.com/oEKoOdKRmP

According to ESPN, the image belongs to Matthias Schlitte, a professional German arm wrestler who was born with a genetic defect that makes his right arm bone look much larger than his left arm. This image was clicked during the World Arm Wrestling Cup in Zagreb, Croatia, where he came in second place in 2015 and 2016.