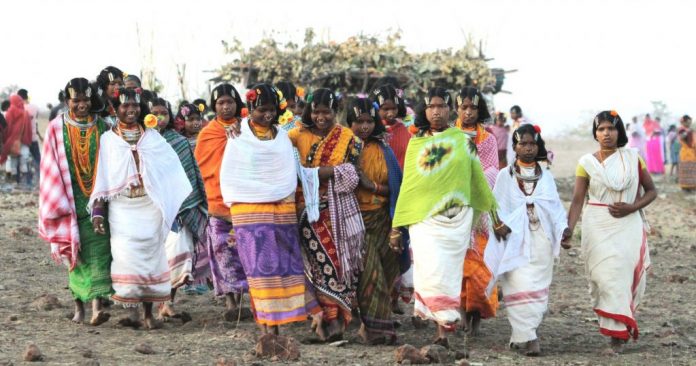 Bhawanipatna: The Dongria Kondh and Jharnia tribals are all set to protest the Citizenship Amendment Act (CAA) and National Register of Citizens (NRC) during the annual Niyamraja festival on Niyamgiri hills in Kalahandi district which starts Friday.

The tribals while staging a demonstration against the contentious CAA and NRC will burn the gazette notification of the law during the event.

The three-day Niyamraja festival atop the Niyamgiri hills will start February 28 and conclude March 1. The festival has proved to be an occasion for local people mostly Dongria and Jharnia tribals to express their anguish over the issue of mining in the bauxite-rich hills.

The tribals will congregate at Garata village in Munikhol panchayat and celebrate the festival atop the hills. Over 8,000 Dongria and Jharnia people live in 200 villages spread over the Niyamgiri hills. The tribals cultivate kandhul (country arhar), millet, horse gram, maize, mangoes, oranges, banana and pineapples and earn their living by selling them in the local markets and to traders.

The Niyamraja festival is celebrated by the primitive tribes living in the hills spread over Kalahandi and Rayagada districts.

The tribals under the aegis of Niyamgiri Surakshya Samiti have been celebrating the festival with a vow to protect the water, land and forest and to prevent multinational companies from carrying out any kind of mining in the hills.

The festival, however, got a boost in 2013 when the tribal people emerged victorious in the 12 gram sabhas held on the Supreme Court order to decide on mining in the hills. Since then, the Niyamraja festival has become an expression of the local villagers’ fight against illegal mining.

The 15-year-old festival has its roots in the local belief that the sacred hill is their god and will forever act as their source of livelihood and they got to protect it at any cost.

The tribals are strongly opposing the attempts by the state government to leasing out the hills to multinational companies for bauxite mining.

The tribals strongly believe that Niyamgiri is their presiding deity and spiritual identity which has been protecting and nourishing them since ages.

It gives livelihood to the thousands of mountain dwellers and they can’t think about giving these hills to the companies for mining.

The tribals get dressed up in their traditional attire and wielding weapons dance to their joy as part of their celebrations. They sacrifice hens, pigeons, goats, pigs and buffaloes at a place called Dharanipenu on the hills to propitiate Niyamraja. The tribals mix rice with the blood of the animals and take pledge to protect the hills at any cost.