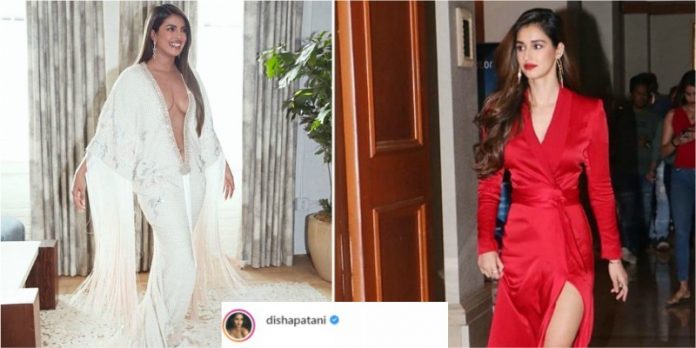 Priyanka Chopra’s outfit at the Grammy Awards has become a talk of the town. Priyanka looked nothing less than a goddess in the stunning Kimono dress, which featured a plunging neck-line till her navel, has kept everyone talking about it. The plunging neck-line resulted in people trolling and mocking her for it.

Recently, many popular celebrities came out in support of the actress. The latest one to defend her was Disha Patani.

Disha Patani, who is currently super-busy with the promotions of Malang, recently slammed the haters for trolling Priyanka Chopra for her choice of the outfit.

In an interview, Disha Patani showered praises on Priyanka Chopra and talked about how she looked stunning in the outfit. She also slammed the trollers claiming that when the outsiders wear such dresses they are always appreciated, unlike Bollywood celebrities. She said:

“She looked beautiful. I mean honestly, it’s kind of a mentality that if someone from your own country is wearing certain kinds of clothes, you are always trolling them but if you see someone else, from outside, then ‘Oh! She’s so beautiful.’ You can’t really help it. You just ignore it.”

She also gave it back to the trollers for passing remarks on someone else’s clothes. The actress even went ahead and gave a challenge to the trollers to wear the outfit for 10 minutes in order to realize that the outfit isn’t so easy to carry. She said:

“I don’t understand. Who are you to comment on somebody’s clothes if she is comfortable? I have been telling this to people. I challenge you to wear that outfit for 10 minutes. It’s not easy to wear. It’s not an easy-breezy, flowy, covered outfit that you can just pose and do stuff. It is tricky, God! You got to have that elegance, grace, and courage to wear such an outfit.”

A few days before, Priyanka’s mother, Madhu Chopra also slammed the trollers but also praised the controversy claiming that it made her daughter even stronger. She had said:

“She lives life on her own terms. As long as she is not harming or hurting anybody, it’s her body and she can do what she wants. And she is a beautiful one too. Trolls are anonymous people hiding behind computers. They don’t have joy in their lives, I think. They think they get attention because of the bad things they say. I don’t give much weight to the trolls.”