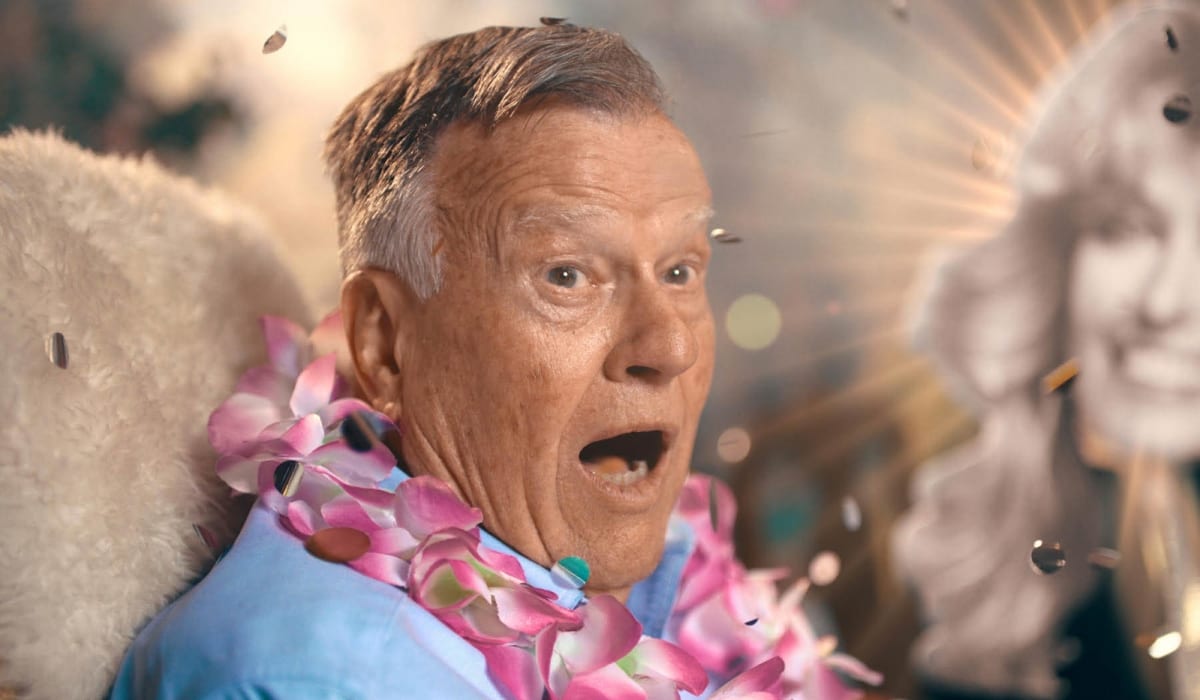 Spoiler alert: Dick Johnson is not dead, but he does love chocolate cake. Rich, gooey, dense chocolate cake—the kind that could give him a heart attack. Which it did.

In the new film titled Dick Johnson Is Dead from Netflix, filmmaker Kirsten Johnson and her father come to terms with his death before it happens in this precious, funny, and heartfelt goodbye letter to a loved one that is still here.

After Johnson’s father was diagnosed with dementia, Johnson had to grapple with the fact that her best friend would be gone long before he physically left. The loss of a parent—in any facet—is never easy, as anyone who has ever lost a parent will know. But, as Johnson demonstrates in her new documentary, losing a parent who has lost their memory is often a long and never-ending process that is only lessened by the occasional reminder that they are still physically there to celebrate both the small and big things in life.

I should preface this review with a disclaimer: Dick Johnson is not my family, technically, but as someone who has celebrated quite a few Thanksgiving’s with Dick Johnson sitting on the couch next to my own aging father, this film was especially hard to watch. Kirsten Johnson, the vibrant and cheerful mind behind the film, is the mother of my twin niece and nephew, who can be seen throughout the documentary as they play with their grandpa by burying him in the sand on a Portuguese beach or baking him a surprise chocolate cake for his birthday.

Regardless of my own personal relationship with the filmmaker and its subject, Dick Johnson Is Dead will tug at the hearts of anyone with a close relationship to an elder—or even anyone plagued by the constant reminder that tomorrow may never come. In the wake of a tragedy, such as the one that took the lives of Kobe Bryant and eight others just this past weekend, a film such as this serves as a moment to allow viewers to slow down and appreciate the time they have with their loved ones.

Johnson takes her viewers on an emotional roller coaster, wherein tearful scenes between she and her father discussing his condition or his wife—her mother—who passed away several years prior—serve as a moment of catharsis in between comedic scenes of Dick staging his death in different tragic accidents or visualizing what his own version of heaven might look like (for the record, his heaven looks awesome).

Johnson’s own past as a filmmaker (2016’s Cameraperson was shortlisted for an Oscar, while her work on 2010’s The Oath and 2014’s Citizenfour earned her a reputation as one of the most renowned figures in the documentary world) comes into play as Dick Johnson Is Dead serves as a sort of follow-up to her own visual memoir, Cameraperson.

Johnson is seldom in the film—popping in and out to help her father fictionalize his own death or comfort him in moments of realization that his condition has rendered him unable to do things like drive or live on his own. But in the same ways that Cameraperson found meaning in the nuances of film, Dick Johnson Is Dead finds its sweetest moments in its smallest ones.

Shots of Dick poking his head around the corner with a sly smile on his face as his grandchildren bake him a cake, or personal moments between the filmmaker and her father as they cry together become the parts of the movie that string together the more lighthearted portrayals of Dick dying in staged accidents, which I won’t describe too deeply to let you enjoy the film yourself.

For two characters with tons of personality on their own, both Kirsten and her father manage to steal the hearts of their audience over and over again, while also breaking your heart. Dick Johnson Is Dead will be released on Netflix around Father’s Day, and serves as a moment of catharsis for anyone that has ever lost a parent—or hasn’t.