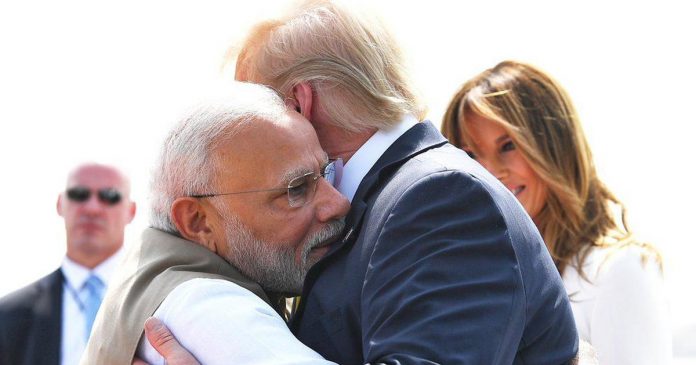 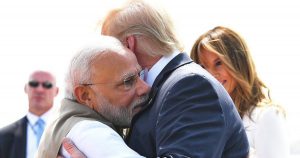 US President Donald J Trump’s India visit is not only on but shaking things up. He attended the spectacle arranged for him at the Motera stadium in Ahmedabad before delivering a speech in which he only spoke about a trade deal and some armament sale to Indians. This, at a time when the country is facing a slowdown and questions are being raised about whether India can get its act together and see through the crisis. Trump has termed Modi a tough negotiator. Whether that image is true or not, the people of this country have yet to experience. Yes, within the country, in internal matters, the Modi administration has been brutal in dealings with the people. However, the same is definitely not the case with diplomatic deals in the past 6 year years. Not that the UPA was a better negotiator. But Modi’s performance has not borne any fruit even after constant travels abroad by the Prime Minister.

India should not become the dumping ground of obsolete American armaments and excessive agricultural produce. If the country goes ahead and accepts the US deal, proposed to be of the magnitude of $3 billion, it will effectively toll the death knell for indigenisation of defence production, whatever minuscule quantum of it is happening, and affect the country’s fortunes in the long term. Modi will surely see through this ego pampering that Trump is doing to make the leadership sign on the dotted lines. He has quite elegantly played to the gallery back home as well to make it seem that he was going to redress the trade deficit with India. The fact remains though that the fine words of Trump butter no parsnips. The Sardar Patel Stadium, or Motera stadium, may be the largest in the world, but there was a stretch of road on the way to the stadium that the administration blocked from Trump’s view by means of a wall. The extant realities of India cannot be wished away or be ignored by such blindfolds. Trump probably had this ‘Wall’ in his mind when he mentioned in his speech that India’s poverty shall be vanquished in 10 years. This statement contradicts his administration’s commerce department policy directive which, a few weeks ago, categorised India as a developed nation and stripping it of various trade benefits. Apart from that, people who live in or have visited President Trump’s own country must be aware that poverty survives even in the USA, though not with the same horrible face as in India.

Apart from some praise for Modi, his mention about Pakistan too being a close ally of the US bears tremendous diplomatic importance for India.

The problem could have been in Indian perceptions. Generally when offered such a golden opportunity to address such a large crowd prior to elections, an Indian politician would make a million promises. Thinking or miscalculating that Trump too would use Indian soil to address the Indian diaspora in the US who could be influenced to vote for him this November, may have backfired. US politics does not work in similar fashion as in India. Even a controversial POTUS as Trump has stuck to his pointless promises. He paralysed the US government for a few days when Congress did not permit funding the Wall he wanted built between Mexico and US. He had promised he would deal a death blow to the IS. He did it. He had assured the American that he will disembowel China. Well, he has done some damage. Commitments are to be honoured. Therefore, it should also have been expected from Trump to praise Pakistan.

This mention of Pakistan is nothing but a very strong message for the ruling elite of India today. Always attacking their political opponents as Pakistan supporters and labelling citizens as Pakistanis may take a new turn after Trump patted Pakistan. That too in the presence of Prime Minister Narendra Modi and in his home state of Gujarat.