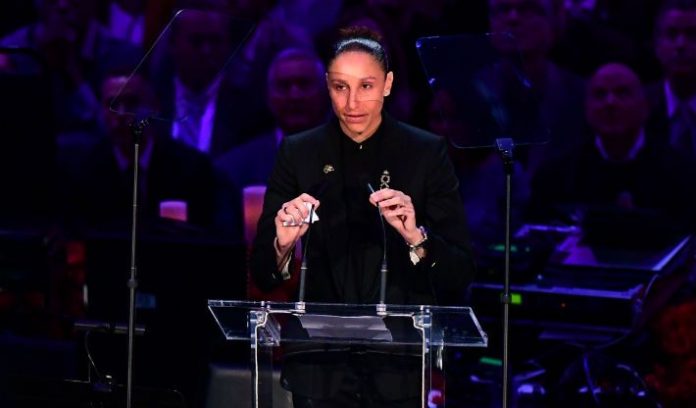 The memorial at Staples Center on Monday to honor the lives of Kobe and Gianna Bryant was filled with loving tributes to those that died in a tragic helicopter crash last month. That included a tearful speech from Michael Jordan and hilarious stories from Shaq. But the world of women’s basketball was impacted by their deaths as well, and that was given proper tribute in Los Angeles as well.

Vanessa Bryant touched on Gianna’s love of basketball, claiming that “Gigi would have easily become the best player in the WNBA.” And WNBA star Diana Taurasi also spoke of Kobe and Gianna’s impact on women’s basketball in a touching speech that described how the women’s basketball legend would mimic Bryant’s game growing up.

Her speech had a rare moment of laughter on what was a somber day in Los Angeles, as Taurasi joked that Gigi Bryant already had moves as a teenager that LeBron James still doesn’t have.

“Her skill was undeniable at an early age. I mean, who has a turn-away fadeaway jumper at 11?” Taurasi asked. “LeBron barely got it today.”

Oregon basketball standout Sabrina Ionescu had a special relationship with Bryant, who she considered a mentor, and talked about the impact Kobe had on her life and how she saw his impact on Gianna’s love of women’s basketball.

He shared a story about the famously uncoachable Bryant asking Auriemma for coaching advice.

Geno Auriemma: “He said, ‘I’m coaching my daughter’s team.’ I said, ‘Oh, my god. That poor kid.’ So when I watched highlights of her playing, on about the 3rd or 4th time she touched the ball, Gianna passed it when she was open. I thought, ‘she’s not listening to her father.'” pic.twitter.com/e4xuVwpMKa

“Gianna passed it when she was open. I thought, ‘she’s not listening to her father,’” Auriemma said, drawing laughs. He also shared a funny story about how much Gianna loved UCONN basketball, even at the expense of other women’s basketball powerhouses.

It was a fitting string of tributes to Gianna and Kobe’s impact on and love of the women’s game on a day where a young life cut tragically short was mourned just as much as the Laker legend known around the world. It was what Kobe would have wanted on a day filled with sorrow and moving tributes to people gone far too soon.