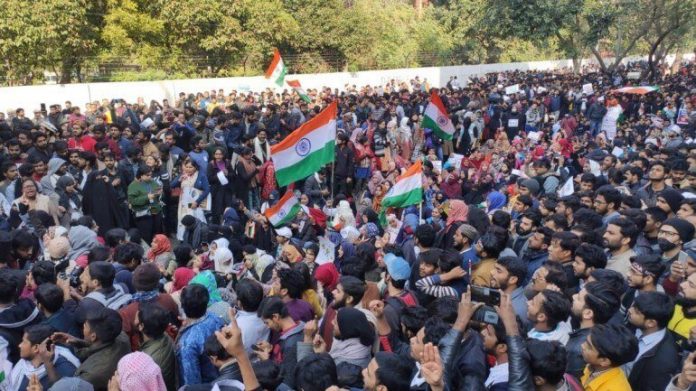 People in Delhi appear to have had enough of the protests against the Citizenship Amendment Act (CAA) in the national capital. Delhiites have been complaining against the ongoing protests that have caused a great deal of distress to the ordinary citizens. Now, it appears, a countermobilization of sorts is happening across the city. On Tuesday, demonstrations in support of the Citizenship Amendment Act (CAA) were conducted at Jamia.

Slogans of “Desh Ke Gaddaron Ko, Goli Maaron Saalon ko” were raised at these demonstrations. Union Minister Anurag Thakur was forced to quit as a star campaigner for the BJP in the Delhi Assembly Elections by the Election Commission for the same slogan.

Reportedly, 40 people have been detained in Jamia for the pro-CAA protest.

The slogans are indicative of the sentiment of the people of Delhi regarding the protests that have been going on in the national capital ever since the passage of the Citizenship Amendment Act. As expected, these protests have acquired a central position in the election campaign leading up the Assembly Elections in the national capital. Despite causing great harassment to the ordinary citizens of Delhi, these protests have received great support from the Aam Aadmi Party and the Congress.