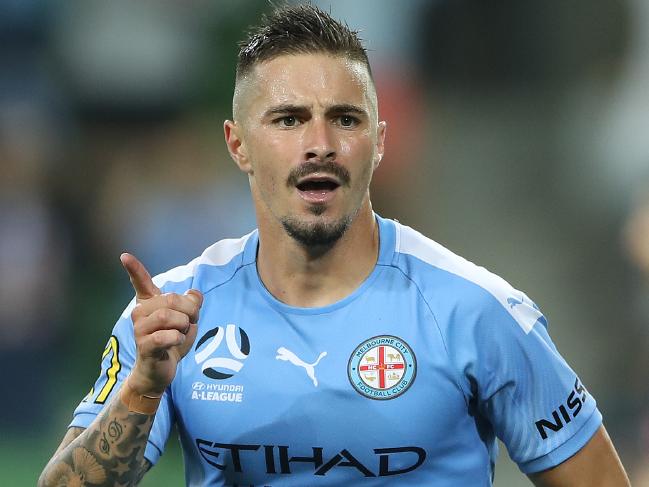 Frenchman Erick Mombaerts has brought the flair back to Melbourne City in more ways than one this season, and it was countryman’s breakout display that delivered derby delight.

Marquee player Berenguer, who’s had a largely underwhelming 18 months at City, netted his first City goal and assisted the second in his best display in 27 outings, delivering City one of its most important win. Ever.

A catastrophic goalkeeping gaffe from Olyroo Thomas Glover – who was replacing Dean Bouzanis (missing for personal reasons) gifted Victory gun Ola Toivonen his easiest goal of the season, but it proved merely a consolation in City’s 2-1 win at AAMI Park.

Victory’s loss was soured by a hamstring injury to Socceroo Robbie Kruse, who limped down the tunnel just 29 minutes after coming on.

Striker Jamie Maclaren celebrates what turned out to be the winning goal for Melbourne City. Picture: Getty ImagesSource:Getty Images

In a generally underwhelming A-League season, this was undoubtedly a high watermark.

The fans were in great voice – led by the Victory fans, in their loudest display of the season, despite the result.

Mombaerts opted for the hipster look, with an untucked shirt and vintage wide tie part on an ensemble that included a black unzipped hoodie, baseball cap and white kicks.

City’s football was as fashionable as the 64-year-old’s get up, with fellow Berenguer opening the scoring after the home side ruthlessly exploited a rookie error. Victory forward Robbie Kruse cops a shove from City’s Adrin Luna after he objected to being fouled by City’s Florin Berenguer. Picture: AAPSource:AAP

Ben Carrigan, in just his third A-League start, was over-eager to nick ball on halfway from Adrian Luna, who used his South American street smarts to evade and penetrate.

Berenguer’s clever positioning and sublime first touch enabled him to finish a passage that would too often be botched.

Luna and Berenguer – courtesy of a sumptuous backheel – again combined, with Craig Noone also playing a part, in a superb passage that ended with Jamie Maclaren’s 14th goal of the season in the decisive second goal.

Victory’s new 3-4-3 formation appeared to suit the profile of players at his disposal, but the lapse left them scrambling with the defensive midfielders to slow to retreat. A moment to forget for Melbourne City goalkeeper Tom Glover as he lets Ola Toivonen’s free kick slip through his hands and into the net. Picture: AAPSource:AAP

City had no choice but to go makeshift, with Rostyn Griffiths expertly filling a gap in an undermanned defence which Victory tried to exploit.

Marco Rojas nearly lifted the roof off AAMI Park when he was sent on along with Kruse in the 55th minute.

They put City on the back foot momentarily without being able to effect the game, but it took Glover’s gaffe to give the “visitors” hope. The importance of the win was highlighted by Mombaerts’ ecstatic display at the final whistle, which included a consolatory word with Glover.