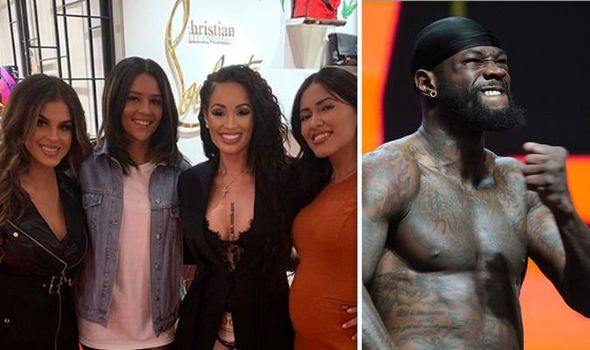 Deontay Wilder’s financee Telli Swift hailed ‘a few boxing wags’ ahead of the rematch with Tyson Fury in Las Vegas. Wilder goes toe to toe with Fury for a second time tonight for the WBC heavyweight title.

And Wilder’s fiancee Telli posted a thank you to a group of ‘boxing wags’ in the build up for their support during a Louboutin event.

Telli will be ringside during the fight, but has sent Fury a message, warning him he will get knocked out tonight.

“Told ol’ boy he got get knocked tf out,” she wrote.

Wilder beat Fury on points in the controversial bout in December 2018 when they first met in Los Angeles.

Fury was sent to the canvas but rose up to finish the 12 rounds, and was furious with the decision that saw Wilder’s arm raised.

He is looking to set the record straight tonight and wants to get his hands on a heavyweight title for the first time since having to give it up due to drug problems and depression.

He has fought four times since then after returning to the sport – including the defeat to Wilder.

And Fury’s cousin and trainer Andy Lee gave an insight into the feel inside his camp this week.

“It’s like every other day. We’ve had a laugh and a joke, he’s ready to go. I’m very focused, we know what we have to do.”