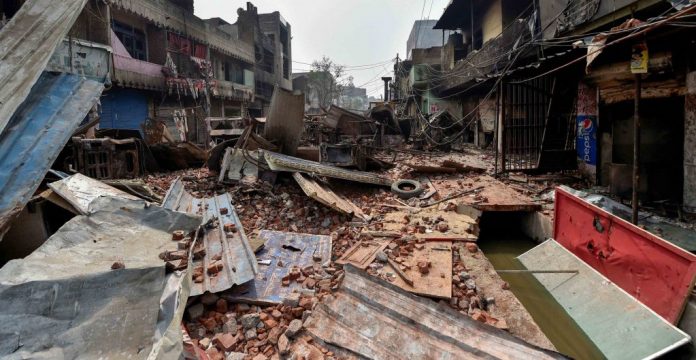 New Delhi: A labourer who had migrated from Bihar, a garage owner, and a driver and his younger brother were among the 38 people who lost their lives as armed mobs ran amok in the streets of northeast Delhi.

Aamir (25), who worked as a driver, and his brother Hashim (16) set out from Ghaziabad Wednesday to check on their elder brother Shairuddin in Gokalpuri, one of the focal points of the violence.

“Shairuddin tried to convince them not to come, but they said they will use bylanes to avoid the mobs. That was last conversation between Aamir and his brother,” Akram, a friend of Shairuddin, said.

After Aamir and Hashim did not make it to Shairuddin’s place till 10 pm, their family members began calling them only to find that their mobile phones were unreachable, he said.

A missing complaint was lodged Thursday.

At the police station, the family’s worst fears came true as a lady officer told them that she had seen the bodies of the two brothers at the Guru Tegh Bahadur (GTB) Hospital mortuary.

“The family rushed to the hospital and identified their bodies. They were told that the bodies were pulled out of a drain between Ganga Vihar and Gokalpuri,” Akram said.

Deepak Kumar (34), a native of Bihar’s Ara district who worked in a manufacturing unit in Gokalpuri, was trapped in the violence and shot dead by rioters Tuesday.

His brother Ajay said he was shot multiple times in the head.

Mubarak Hussain (31), a tile unit worker who lived in Vijay Park area was also shot dead Tuesday afternoon in Maujpur, which was among the areas worst-hit by the violence.

Akbari (85) died due to asphyxiation after her house at Gamri village near Khajuri Khas was allegedly set on fire Monday. Thursday, her family took her body home to Meerut.

Parvez Alam (50), a garage owner, from Ghonda was shot in his back while he was trying to pacify an irate mob.

His 20-year-old son Mohammed Sahil and nephew rushed him to hospital on a motorcycle. They put a tilak on their foreheads to escape the angry crowd on the way.

Alam died during treatment at the hospital.

Rahul Solanki (26), who was pursuing his LLB from a private college in Ghaziabad, was shot in his right shoulder Monday when he had stepped out to buy milk.

Wednesday, his father requested security personnel to give them protection so that the family could conduct his last rites peacefully.

Muddasir Khan (35) was shot outside his house in Kardampuri Monday.

He sustained a bullet injury on his head and was declared brought dead by doctors at GTB Hospital.

Most of those who were killed suffered gunshot injuries and were brought to the GTB Hospital.

Many are yet to be identified.