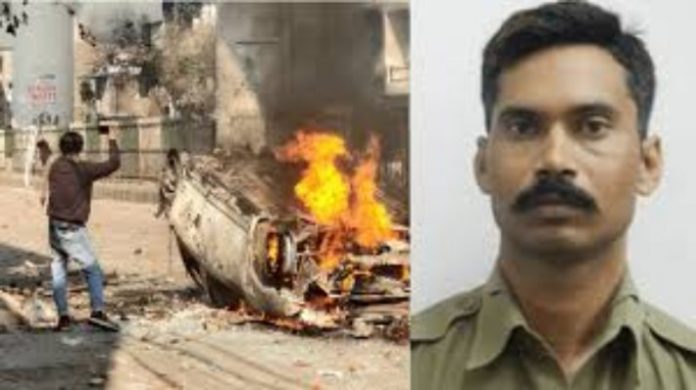 The post-mortem report on Tuesday has revealed the exact cause of the death of the Delhi police head constable Ratan Lal who had lost his life in the riots that have ensued in Delhi in wake of the protests against the Citizenship Amendment Act.

According to the autopsy report cited by News Nation, Ratan Lal had died of a bullet injury. Earlier, it was believed that a stone took his life. “A bullet was stuck in Ratan Lal’s body. It entered from left shoulder and went to the right shoulder. It was removed during autopsy,” the report said. “Ratan Lal was shot dead,” the autopsy report revealed.

Lal belonged to Fathepur Tihwali village in Rajasthan’s Sikar district. Lal is survived by his wife and three children. The Sikar resident had joined the Delhi Police as a constable in 1998. He married a Jaipur resident in 2004.

Violence had erupted across the national capital again as anti-CAA Muslim rioters escalated their efforts to spread anarchy in Delhi.

The deceased policeman, identified as Head Constable Ratan Lal had lost his life during the violence in North East Delhi yesterday. Another DCP had been injured during clashes between two groups in Delhi’s Gokulpuri.

Amidst the riots, a video of a man opening fire at the police, and one policeman bravely standing in his way has also emerged. The shooter, identified as Shahrukh, has now been arrested.

The Death toll in northeast Delhi violence has risen to seven, while around 105 people have been reportedly injured.