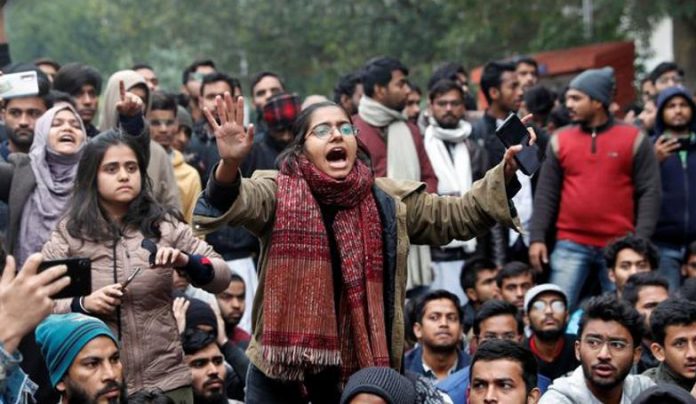 New Delhi: The Delhi Police have announced a cash reward of Rs 1,00,000 to anyone who shares information which could help in tracing unidentified accused in the December 15 anti-CAA violence near Jamia Millia Islamia, officials said Monday.

In an order, Delhi Police Commissioner Amulya Patnaik declared a ‘cash reward of Rs 1,00,000, which will come in force with immediate effect and shall stand/remain good till the arrest of the unknown accused persons for anyone who may give any information/clue(s) to trace out the unknown accused persons who are wanted in a case of New Friends Colony and evading their arrest intentionally’.

An FIR at New Friends Colony Police Station was registered December 16 on charges of rioting, arson, unlawful assembly and damage to public property in connection with the violence December 15 near the Jamia Millia Islamia University.

According to the official order, as and when any information about the accused is received, the same may be sent immediately to DCP (Southeast) or DCP (Crime Branch).

“The Commissioner of Police reserves the right to decide finally by whom the reward has been earned and in what proportion it will be distributed amongst various claimants, in case more than one claimant come forward for the same,” the police said.

Protestors had torched four public buses and two police vehicles as they clashed with police in New Friends’ Colony near Jamia Millia Islamia during a demonstration against the amended Citizenship Act on December 15, leaving nearly 60 people including students, cops and fire fighters injured.

Police used batons and teargas shells to disperse the violent mob, but denied firing at them. Following the arson on roads, police entered the Jamia university campus, where tension prevailed as several persons were detained for alleged involvement in the violence.