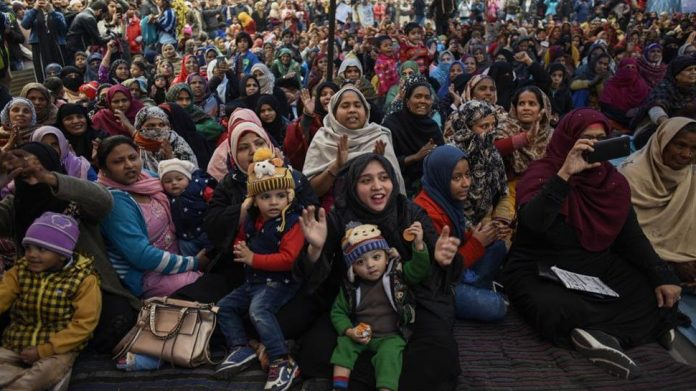 In a huge setback to ‘protestors’ at Shaheen Bagh, the Supreme Court on Friday took cognisance on its own to “stop the involvement of children and infants in demonstrations” following the death of a four-month-old infant at Shaheen Bagh on January 30 in Delhi.

Reportedly, the Supreme Court has listed the hearing of the plea on its website and the issue will likely be taken up for hearing on February 10 by a bench headed by Chief Justice S A Bobde.

This development comes after National Bravery Award winner Zen Gunratan Sadavarte had written to the Chief Justice of India (CJI) seeking directives for stopping children from being used in protests days after reports had emerged that at least one infant had died after parents took them to Shaheen Bagh for protests and exposed them to Delhi’s bitter cold.

Read: NGO linked to George Soros, who had declared war against ‘Nationalists’ and PM Modi, calls for people to join Shaheen Bagh protests

“The Shaheen Bagh protesters at New Delhi, include women, senior citizens, newborns and children, ignoring the fact that newborn babies need a lot of attention and care as they cannot express their pains in particulars thereafter also ignoring the conditions unfavourable to the children, they are brought to the protest place which is violative of their child rights and natural justice,” the letter written by Zen Gunratan Sadavarte said.

In one of the most heart-wrenching of recent times, four-month-old infant Mohammed Jahan lost his life after suffering from severe cold and congestion during anti-CAA protests in Shaheen Bagh. However, Nazia, the mother of the four-month-old infant Mohammad Jahan, is unapologetic about her son’s death but instead has chosen to ignore his death and rejoin the ‘protests’ at the Shaheen Bagh.

Following the incident, there was shock and anger against the parents of the kid for allowing her one of their children to die. Netizens and citizens across the country had asked how could a mother enable her children to lose life for a petty political cause. What shocked the most is the casual reaction of the mother regarding her son’s death.

Another 2-month-old infant had also lost her life due to weather conditions in Delhi after her mother used to take her for anti-CAA protests at Jamia and Shaheen Bagh.

Addition to this, the anti-CAA protestors have been using kids to peddle their political agenda and have kept women and children at the forefront of these so-called protests. The small kids, who seem to have no idea regarding the Citizenship Amendment Act, have been used as a ‘prop’ at these protests.

Just yesterday, a shocking video had emerged in which kids are seen holding posters of the four-month-old infant Mohammed Jahan, who lost his life after suffering from severe cold and congestion during anti-CAA protests in Shaheen Bagh.

Read: Shaheen Bagh protesters, your delusions of grandeur, Jihad and hatred are responsible for the death of the baby

Shockingly, one of the protests of the event can be heard in the background claiming that the death of the four-month-old kid was nothing but a ‘Qurbani’ or sacrifice for the anti-CAA movement.

Earlier, an NGO named ‘Save Child India’ had filed a complaint with the National Commission for Protection of Child Rights (NCPCR) registering their concerns over the fact that children are being used in protests as props. The NGO had said that using children as props for anti-CAA protests was a gross violation of the rights of children and calls it child abuse. This complaint came after several children were seen raising slogans and protesting in Shaheen Bagh.