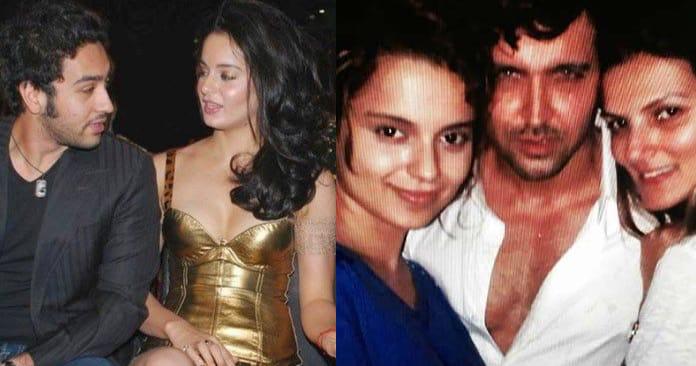 Kangana Ranaut has come a long way down to Bollywood town and make millions of fans in Bollywood.

She is one of the actresses who can sell the movie on her name. Kangana has done many women-centric roles in her career.

Little you know that Kangana is also a hero in her real life. She is fiery in all her interviews and media interactions. She is opinionated and never shy to tell people what she feels.

However, the actress has a lot to hide if she wants to look good in front of the media. Here are the dark secrets of Kangana Ranaut.

While sex scandals are often punched under the glamorous life in Bollywood. Some divas now come in front of the camera to spat the ugly truth about the industry.

Many actresses have stated in the media about how they were asked for sexual favors in their auditions.

Kangana also stated in her interviews that she was asked for
favors during her auditions but she had full faith in her talent and
capabilities.

Many debates were going on when Hrithik and Kangana fought. Kangana said that she had kept her affair secret for a long time and she was not interested in Hrithik Roshan anymore.

Hrithik replied that he hadn’t had any affair with Kangana Ranaut ever. Hrithik even said that he would more into his pop if it comes to affairs.

However, nobody took it seriously but this was the worst that anyone could do to his ex-girlfriend. Apart from this, the whole Adhyayan family has come forward to talk to the media about the details of their relationship.

Kangana said, “Adhyayan and I had a talk about our
relationship and he decided to move on. It came as a shock to me. It’s an
amicable break-up…’’

Adhyayan had said, “At this point, I really want to focus on
my career and professional commitments. Sustaining a long-distance relationship
of this intensity is tough.’’

Kangan was also linked with veteran actor Aditya Pancholi. She said that she was physically abused and she also reported an FIR against him. Later, Aaditya Pancholi refused to give any response and brought his lawyer forward.

5. An illegitimate affair with Ajay Devgn

It was rumored that Kangana was involved with her ‘Once Upon A Time In Mumbai’ co-star Ajay Devgn. At that time, Kangana broked up with Adhyayan Suman.

However, Ajay Devgn was very loyal to his wife Kajol, so there was no chance he would leave his marriage for Kangana.

Thus, the no string attached affair of Ajay Devgn and
Kangana Ranaut ended shortly. Kangana has admitted that being in a relationship
with Ajay Devgn was a mistake on her part, and she shouldn’t involve with a
married man.

Kangana has also been involved with the British doctor Nicholas Lafferty as Nicholas has paid many visits to Mumbai. According to sources, Nicholas and Kangana used to be in a long-distance relationship.

Sadly, the affair didn’t work out and the couple ends up separating their ways. It can be said that Kangana is now the biggest superstar in Bollywood but she is not lucky with her love life.

7. Kangana opens up about the #MeToo incident

Kangana became a huge star after the movie Queen directed by Vikas Behl. It is expected from Kangana to pay gratitude when Vikas was accused of harassing and casting couch during the #metoo campaign.

However, Kangana didn’t take the support of her director, instead, she said that Vikas can be involved in me too moments as he used to touch her during shoots.

8. Fights with media and producers

Kangana often ends up stating something that is pretty harsh for others. For instance, during an interview session for Judgemental hai Kya, Kangana fought with a journalist who has written some bad words for her.

Similarly, she stated that she doesn’t want to work with Karan Johar and the only film Karan Jhar offered her was a big flop in her career.