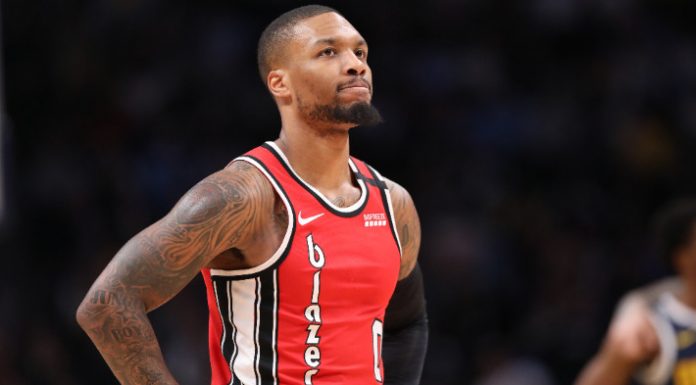 The Portland Trail Blazers suffered a brutal loss on Friday night at the hands of the Utah Jazz. Despite being short-handed, the Blazers battled valiantly and had a chance to tie things late in regulation. Damian Lillard was able to get to the rim, where Rudy Gobert committed a goaltending violation, which should have tied the game at 116 with about 13 seconds left.

However, the officials did not call it, telling Lillard that they thought it was a clean block. Utah would go on to win, 117-114, and the Blazers’ MVP candidate was understandably furious. The usually unflappable Lillard, who was outstanding en route to a 42-point evening, had to be held back by an assistant coach while he screamed at the officials, and during his postgame media scrum, he made it clear that he believed the failure to make that call prevented Portland from picking up a win.

“We get to the last play of the game, and they miss an easy call,” Lillard said, according to ESPN. “And then they tell us that’s an easy no-call, like that was obviously not a goaltend. Cost us a f*cking game, man. Cost us a game.”

Lillard would go on to tell the press that “I don’t wanna see no report about, ‘Oh, we should’ve called it’ or none of that. They cost us the game. We in a playoff race, and they cost us the game on an easy call.” That sentiment was on display on social media, too, as he used that as an outlet to express his frustrations with the no-call.

He also made it clear that he isn’t worried about the fine from the league for his reaction to the end of the game because, well, you can probably guess.

Unsurprisingly, Lillard wasn’t the only frustrated Blazer, as head coach Terry Stotts called the no-call “inexplicable” and C.J. McCollum argued the officials should be “fined accordingly.” With the loss, Portland fell to 24-29 on the season and are 2.5-games back of the Memphis Grizzlies and the No. 8 seed in the Western Conference.