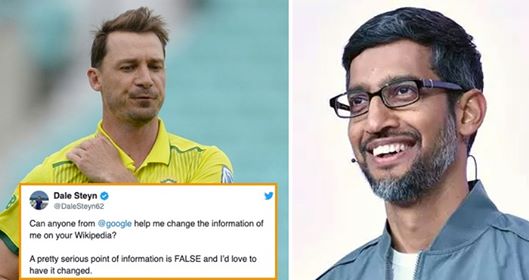 Dale Steyn, the former South Africa Test cricketer still remains one of the best pacers. He left everyone in shock by deciding to step aside from the longest format of the game in 2019 after the World Cup in England and Wales. With his fitness and passion, Dale Steyn still fancies his chances to play in the T20 World Cup in Australia later this year.

Dale Steyn is very active on his Twitter account and is often seen interacting with people on social mal media. Recently, he found himself at the receiving end of trolling on Twitter.

“Can anyone from @google help me change the information of me on your Wikipedia? A pretty serious point of information is FALSE and I’d love to have it changed.”

Can anyone from @google help me change the information of me on your Wikipedia?

A pretty serious point of information is FALSE and I’d love to have it changed.

Well, as soon as the Tweet caught eyes, it was soon flooded with hilarious reactions from Twitterati. He got hilariously roasted by Twitterati as people came up with funny guesses about the particular information Dale was talking about in his Tweet.

You can edit it yourself Dale? I can change it..to the world best bowler ever if you like?

Don’t say you wanna edit “He is regarded as one of the greatest fast bowlers of all time” part. ????

Is it showing neighbour of @kunalkamra88 ????

Does it say Jimmy is better than you ?

Did anyone mentioned your IPL Team where champions once ????????

So the mistake is that they said you celebrate vigorously. Right!?