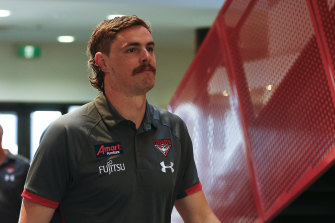 Joe Daniher went to Ireland to treat his troublesome groin. Conor McKenna has just gone to Ireland to alleviate a bout of homesickness.

It is unclear when Daniher and McKenna will next don the sash, though the Bombers are confident that the running Irishman will return, and hopeful that Daniher will be ready to play earlier than the pessimistic scenario of the season’s mid-point.

Michael Hurley and Cale Hooker are recovering from hip and shoulder surgeries. Dyson Heppell is coming back from a sore foot. Tom Bellchambers (knee arthriscope) and Anthony McDonald-Tipungwuti (calf) have had small setbacks.

Zach Merrett is nursing, not an injury but disappointment that his peers did not deem him worthy of a position in the leadership group, some 12 months after he was viewed as a prospective successor to Heppell.

So, as the above litany suggests, Essendon has had a challenging post and pre-season period. There is less optimism about the club externally than there was in 2019. Back then, everyone wanted to buy shares in the Bombers, who had just acquired Dylan Shiel and were hyped – unrealistically –  as a possible premiership contender.

Today, Essendon shares are in a slump. Market expectations are modest. The Dons aren’t a boom stock like the Bulldogs.

But before you dump those red and black stocks, bear this in mind: that, while the injury/availability prospectus isn’t blue chip, February’s injury list won’t be the critical factor in Essendon’s 2020 campaign. 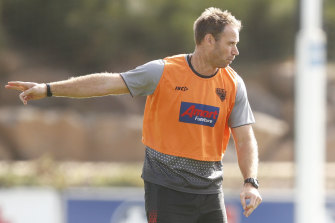 Worsfold will oversee the team performance, with heavy delegation. Rutten and Caracella will be responsible for the game plan, and for educating the players and coaches in that method.

Caracella, instrumental in Richmond’s less constipated ball movement from 2017, will have the same portfolio at his first club, and a say in the midfield function.

Essendon’s failure to win finals was not due to insufficient talent, though the list has some potholes. The shortfall has been in system and cohesion. Unlike Richmond and (moderately talented) Hawthorn, the Bombers have not been difficult to play against. They have not displayed a consistent, coherent and well-executed brand.

Their team defence improved last year, but is a long way from the best sides. The renovation of the leadership group, meanwhile, pointed to the reality that they erred last year by leaving Hurley out of the group, while electing two players – Daniher and Orazio Fantasia – who subsequently either wanted out (Daniher) or explored that option (Fantasia). Merrett’s omission was the result of a new voting system among the players, who were given different criteria to nominate their preferred leaders.

Internally, the view is that there is a clearer understanding of game plan, roles and an improved morale among the coaches, compared with this time last year.

Last year, Essendon was overhyped. This year, there’s a chance that they’ll be under-sold, on the basis of these pre-season setbacks. We shouldn’t forget that, while Daniher’s groin is a concern, they’ve effectively been without him for the bulk of two years.

Richmond and Collingwood’s rises in 2017 and 2018 showed that coaching and culture can count for more than a missing key forward or burst runner. Don’t sell those Essendon shares just yet.