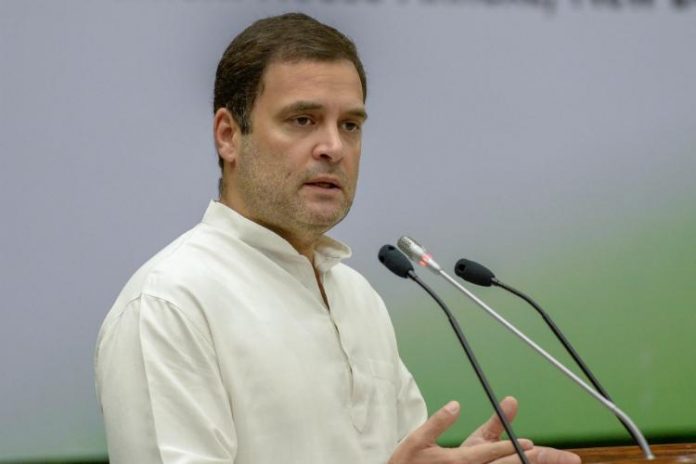 A Mumbai magistrate court summoned Congress leader Rahul Gandhi in a defamation case filed against him by a BJP leader over his “commander-in-thief” remark against Prime Minister Narendra Modi.

The Congress leader is required to appear in person before the Metropolitan Magistrate 25th court, Mumbai, on February 15, 2020. The letter issued to Rahul Gandhi specifies that it is mandatory for him to appear in person to answer to a charge of an offence punishable under sec 499, 500 of IPC.

Prior to this Rahul Gandhi was summoned in the same case by the Mumbai court in August last year. The defamation complaint was filed by Mahesh Hukumchand Shrishrimal (Jain), the 43-year-old Girgaum resident and a BJP worker, in September 2018.

Shrishrimal claimed in his plea that Rahul Gandhi’s remark on September 20, 2018, not only defamed PM Narendra Modi but also hurt the sentiments of the Prime Minister’s supporters.

Shrishrimal handed over CDs of Rahul Gandhi’s speeches and various news articles printed at the time when the former Congress chief made the comment. Rahul Gandhi defamed the prime minister by calling him as “commander-in-thief”, Shrishrimal claimed.

The complainant had asserted that the said news was published in various news channels and newspapers. Thereby the accused has caused defamation of Prime Minister as well as members of BJP, read the order sent to Rahul Gandhi by the Mumbai court which asked the Congress leader to appear in person on February 15, 2020.

Congress Wayanad MP Rahul Gandhi had called PM Modi ‘commander-in-thief’ in 2018 while talking about the Rafale fighter jet deal. He even tweeted the same on September 24, 2018.

Lying blatantly about the Rafale deal Rahul Gandhi in the tweet had posted a video and captioned it: “The sad truth about India’s Commander in Thief,” referring to PM Modi.

The sad truth about India’s Commander in Thief. pic.twitter.com/USrxqlJTWe

Despite all the facts being there out in the open, Rahul Gandhi has time and again used the Rafale deal to defame PM Modi led BJP government. He managed to concoct a “scam” where there existed none and continued with his canards despite the Supreme Court giving the deal a clean chit. The Rafale deal became Rahul Gandhi’s pet issue prior to last year’s Lok Sabha elections. He repeated lies after lies, canards after canards helped by his friends in the media who never questioned him about his assertions.