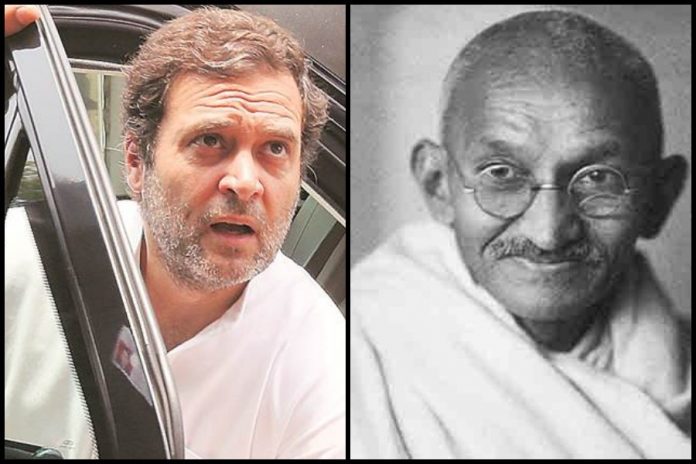 Former Congress President, Rahul Gandhi, the scion of the Nehru-Gandhi Parivar, has often relied on Nathuram Godse to attack Narendra Modi and the Rashtriya Swayamsevak Sangh (RSS). It’s a familiar trope that is often repeated all across the media by the same set of individuals over and over again hoping that it will somehow stick. It hasn’t stuck thus far and it is unlikely that it will somehow in the future.

In order to draw a comparison between Godse and the Prime Minister, Rahul Gandhi decided to play a psychoanalyst in Kerala on Thursday. But, as expected, tied himself up in knots. He began by saying that Nathuram Godse shot Mahatma Gandhi because he did not believe in himself and ended by saying that the Prime Minister is the same as Nathuram Godse because he only believes in himself.

#WATCH Rahul Gandhi, Congress in Kalpetta, Kerala: Nathuram Godse shot Mahatma Gandhi because he did not believe in himself, he loved no one, he cared for nobody, he believed in nobody and that is the same with our Prime Minister, he only loves himself, only believes in himself. pic.twitter.com/itx4GKiVIM

Quite obviously, Rahul Gandhi isn’t much concerned about the words that come out of his mouth. He only seeks to repeat Nathuram Godse and Narendra Modi comparisons with enough frequency to make Godse relevant in today’s politics again.

In all of this, there’s a truth that needs to be said here. The murder of Gandhi was a reckless act by a deeply anguished individual in a moment of desperation. The partition of India was one of the most violent and traumatic events in human history. It was impossible at that point for the anger to not boil over and burn the leaders primarily responsible for the partition. Saying Gandhi shouldn’t have been assassinated is the same as saying all those people shouldn’t have been killed or all those women shouldn’t have raped. It’s quite obvious that all these things shouldn’t have happened but they did and it’s quite shameless for people to demonize an entire political ideology for the actions of one individual.

Mahatma Gandhi, for his faults, however, was, at the end of the day, a Hindu. It’s unfortunate that he wasn’t a Hindu of the same mold as Vinayak Damodar Savarkar or Bal Gangadhar Tilak or Shri Aurobindo but he was definitely a Hindu. And that is one thing that cannot be taken away from him. Yes, a lot of his ideas were crazy and unimplementable, some of them pretty disgusting, but his ‘Hindutva’ (Hinduness) is the one thing that cannot be denied. And yet, it is the one thing that has been robbed of Gandhi by the Congress party ever since his assassination.

Read: Three questions that should be asked and debated around Sadhvi Pragya calling Godse a deshbhakt

The Gandhi that most people know today is a hollow shell, a fictional character created by the Congress party for its political purposes. There is nothing ‘Hindu’ about the Congress representation of Gandhi, he has been secularized to such an extent that he is almost unrecognizable from how he actually led his life. Great pains were also taken to deny every similarity that he shared with Veer Savarkar despite the fact that there were many.

Mahatma Gandhi, for instance, had great respect for the cow and believed it was the duty of every Hindu to work for the welfare of Gau Mata. He staunchly believed that protection of cows is an “article of faith” in Hinduism. Not merely that, Gandhi believed that cow protection is the “gift of Hinduism” to the world. In fact, he considered Gau Raksha a sacred duty for Hindus worldwide. Unlike the Nehru-Gandhi Parivar, Mahatma Gandhi had great respect and love for the cow.

Mohandas Karamchand Gandhi also worked immensely towards the welfare of the ‘untouchables’. He dedicated a great portion of his life towards the eradication of untouchability among Hindus. In this, he was similar to Savarkar who was against the evil practice as well and worked greatly towards eradicating the practice. Both of them worked against untouchability based on the philosophy of Hinduism. It was their Hindu values that motivated them to eradicate the evil practice. While Gandhi’s contribution in this regard is acknowledged, the contribution of Hindu Nationalists is often ignored, solely for political reasons.

Read: One Hundred Years of the end of ‘Khilafat’: How the Gandhi supported movement unleashed the beast of Islamic fanaticism

It is also an undeniable fact that after partition was ensured, Mahatma Gandhi wanted India to provide a shelter for all the Hindus and Sikhs who were left on the other side of the border. It was an idea that was reaffirmed by the Congress party and Jawaharlal Nehru later on as well. However, that promise was fulfilled after nearly seven decades by a government which derives its ideological foundations from Savarkar.

Even his impractical and nonsensical pacifism, Gandhi borrowed from Hinduism and not some weird sense of Ganga-Jamuni Tehzeeb. The entirety of Gandhi’s life was dedicated to achieving an ideal that he derived from the principles of Hinduism. Therefore, to deny him his heritage is the greatest disservice to his legacy. It’s also pertinent to remember here that Mahatma Gandhi and Vinayak Damodar Savarkar both wanted a Ram Rajya in India, it’s only that their vision of what constituted such a Rajya would have differed.

The truth of the matter is, Nathuram Godse fired the bullet that killed Gandhi but it is the Nehru-Gandhi Parivar that has done the greatest harm to Gandhi’s legacy. Inch by Inch, they turned Gandhi into a political figurehead rather than securing for him the pedestal of the father of the nation. It’s an entirely different matter altogether that the honour of ‘Father of the Nation’ was too big for Gandhi’s shoes but it’s a fact that the Congress party has tried hard to prevent him from belonging to the entire nation and attempted to restrict him to the petty politics of the country. For the Congress party, settling political scores is more important than honouring Gandhi’s legacy on his death anniversary.