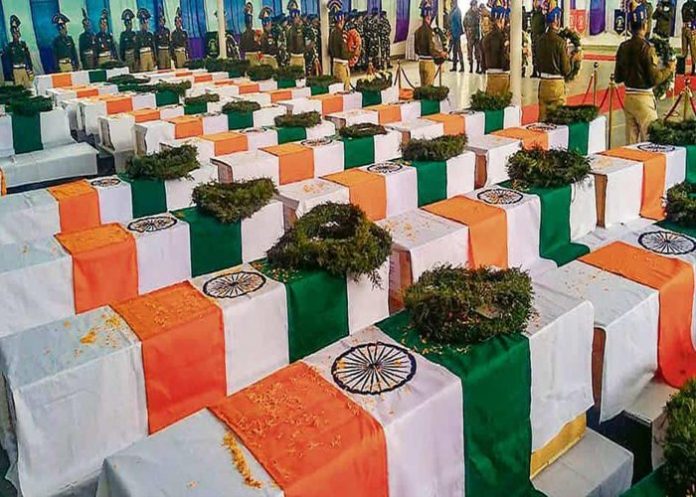 While the nation mourns the 40 slain soldiers who were killed in the ghastly suicide bomb attack in Pulwama a year ago on 14 February 2019, some politicians see the incident only as a tool for blame games and political goal scoring.

Md Salim, CPI(M) politburo member and a former Rajya Sabha MP, has objected to the memorial column to be inaugurated at CRPF’s Lethpora camp today. The memorial is to have the names of all the 40 CRPF cadre who had lost their lives in the attack, along with their photographs, with the CRPF motto ‘Seva Aur Nishtha’ carved along with.

Salim stated, “We don’t need a memorial to remind us of our incompetence. The only thing we need to know is how 80kg of RDX got past the international borders to the ‘most militarised zone on earth’ & exploded in Pulwama”.

He is not alone, he is one of the many leaders from the opposition who had cast aspersions on the attack, ignoring the tragic loss of lives of brave soldiers and had sought to score political goals, the blatant Hinduphobic video of the suicide bomber where he had vowed to kill “cow piss drinkers” and other details.

Read: Pulwama attack: Justice doesn’t give a tiny rat’s furry posterior about the sensibility of elites who go where the money takes them

Congress prince Rahul Gandhi too, had used the ghastly attack as a tool to further his narrow political goals, by repeating Pakistan PM Imran Khan’s lines and insinuating that the attack may have been a false flag operation. It is notable here that terrorist group Jaish-e-Mohammad had claimed the responsibility for the attack.

It is also notable here that the armed forces have hunted down and killed or arrested the conspirators of the attack, including the people who provided the vehicle, to others involved directly or indirectly. It is, however, not understood, why political leaders assume that details of a high-profile enquiry into matters of national security will be discussed in public by the government.