Collingwood have no intention of entering discussions with sidelined midfielder Dayne Beams about his contract following his car accident in Donvale on Thursday.

Sources at the Magpies told The Age on Saturday that football-related discussions were not a priority for Collingwood officials in relation to Beams, who has been on leave from the club since December to work through the mental health battles he has spoken about publicly. 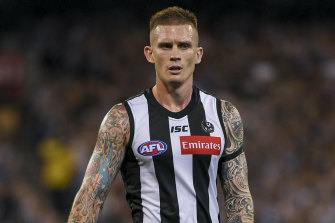 Dayne Beams is taking time away from the AFL.Credit:Eddie Jim

Beams has not played for the Magpies since round nine last season after he returned to the club that drafted him with pick 29 in 2008 in the 2018 trade period with the Magpies giving up two first round picks in exchange for Beams and pick 41 and 44.

He had hip surgery mid-season last year before taking leave to deal with his mental health.

“Trying to improve my quality of life and meet the demands of playing and training for football at the elite level continues to be a struggle,” Beams said in a statement released by Collingwood in December, when announcing the decision to take an indefinite break.

The club has been happy for the midfielder to prioritise his mental health in recent months rather than being concerned about football. That position has not changed following the accident.

The Magpies have one rookie spot available which they have guaranteed to veteran Magpie Lynden Dunn who they intend to choose in the supplementary selection period before the March 13 deadline, provided he has no hiccups as he recovers from a second knee reconstruction.