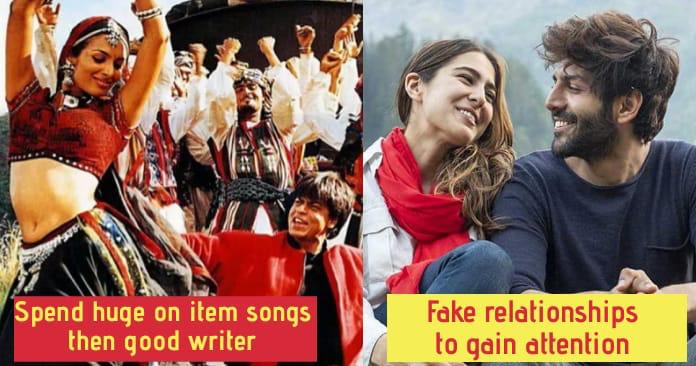 Those were the times when Bollywood movies were watched based on stories and screenplays. Now, most of the commercial movies are driven by star powers and the gossips behind the making. Sometimes, the credit for the success of the movie goes to the PR team of the movie.

There are many instances in Bollywood when actors were seen spending too much time on promotion than shooting schedules. They have come up with lots of new ideas to create buzz for the movie.

Here, we have created this interesting articles based on the facts and incidents showing 7 clever tricks that Bollywood used to make movies viral.

These are the craziest marketing schemes that are used continuously for creating buzz for Bollywood movies.

Little you know that the MAYA concept is still valid and used a lot in Bollywood. Most Advance Yet Acceptable concept tells to use songs that are familiar in Bollywood.

And thus, remixes are used. Furthermore, filmmakers spend a huge amount on a single song in a movie. It creates a buzz, the audience gets interested to know what the song looks like in the movie.

Remember, when Maar Daala song was used as a brand for the Dev Daas Movie that it requires a lot of amounts to shooting that song.

Similarly, all the Rohit Shetty’s movie has a song that took a large share of the movie budget, just to create hype for the movie.

The audience must not forget that a certain movie is about to hit the theatre. And this is the reason that dozens of teasers are released before the theatrical release of the movie.

These teasers include dialogue promos, song sequences, or some important scene from the movie to build movie buzz.

Remember, for the Padmaavat, the dialogue promos were released back to back, and some important scenes were released to tease the audience for the movie.

It was the first scene for the movie Ra. One, where lots of promos and trailers were released on YouTube.

3. Use feminism to sell a film

Feminism fire is spreading everywhere and marketers started using it to spice their movies. The audience is much attracted to something remotely related to feminism.

This is the reason behind recently released dozens of successful women-centric movies. The list includes Pink, Raazi, Chappak, Piku, Queen, Thappad and many more.

Remember the iconic letter Amitabh Bachchan wrote to his granddaughters just before the release of Pink. Well, that was one successful marketing strategy for the movie.

This is an interesting marketing technique for movie promotion. And this is all awesome after the popularity of TikTok that are filled with content creators.

These challenges are nothing much than a huge promotional campaign.

Faking a relationship is an unbeatable strategy for romantic movies. Remember, Ram Leela was a massive hit because of dating rumors of the actors.

Similarly, Kartik Aryan and Sara Ali Khan were rumored to be dating before the release of romance drama Love Aaj Kal.

People seem to be very keen on watching two actors romancing on-screen who are dating in real life.

6. Travel in a train

Interacting with the audience is another major thing that celebs do before the release of their movies.

We are not talking about press release and media interaction, but the surprise interactions as celebs walking in the streets, attend a function or travel on a train. It worked for Ranbir and Deepika during Tamasha.

The small emoji related to movie or movie characters appears when Twitterati posts something specifically for the movies. This marketing trick is used in Befikre, Tubelight, and many more.