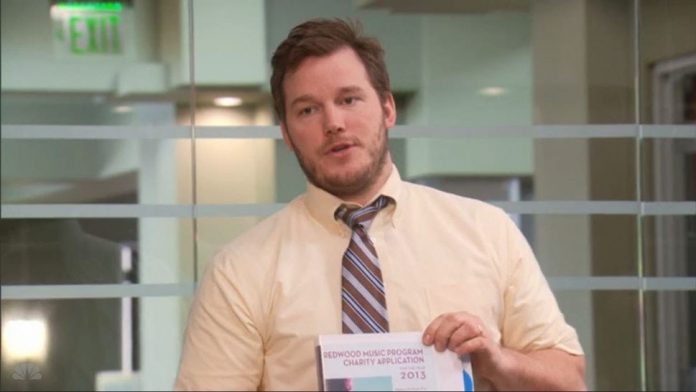 Chris Pratt has been busy as a movie star for the last six years. Ever since his career skyrocketed in 2014 with Guardians of the Galaxy, Pratt is no longer a character actor but a bonafide movie star saving the day and cracking jokes. In these monster-sized movies, he’s yet to capture his charm from his Parks and Recreation days. Any fan of the NBC show should be happy to learn he’s returning to television.

Pratt isn’t doing a TV comedy. According to The Hollywood Reporter, Pratt will star in and executive produced The Terminal List. Director Antoine Fuqua (The Magnificent Seven) is on-board to produce and direct the pilot. The series is based on the first novel in a trilogy from author Jack Carr, a former Navy SEAL. Pratt plays a Navy SEAL in the show. During a mission, the character’s team is ambushed.

When the hero returns home he’s got questions and learns of a sinister force behind the ambush. The plan is to shop the series around to streaming services and respected cable networks, like FX and presumably Netflix. It’s not a limited series.

Outlets such FX and streaming services have been homes to more adult-oriented television. Both allow not only allow for more graphic content but more contemplative stories. There’s time for stories to let things simmer and grow on those platforms. Even better on streaming services? No content restrictions or ads to interrupt the pace and flow. Given The Terminal List is about Navy SEALS (aka very R-rated content), maybe a home such as Hulu, Netflix, HBO Max, or Apple + is best for the project.

When The Terminal List ultimately finds a buyer, it’ll mark Pratt’s first television show since Parks and Recreation. He starred on the always watchable NBC comedy for seven seasons. After the NBC ended, Pratt went on to star in Passengers, Jurassic World, and the Marvel movies.

None of those roles Pratt has played have come close to touching the depth, range, and fun he displayed in Parks and Recreation. We miss that Pratt, who never tried to play it cool.

About half the time in these big studio movies, he’s playing cardboard characters without much personality or inner life. Any movie star could’ve played his roles in Passengers and Magnificent Seven. Those movies remind Pratt fans of the wonders of Parks and Rec, when the actor did the unexpected instead of the expected. Even though The Terminal List is a drama, maybe a couple of seasons of Pratt exploring and playing a character could show another side of the actor.

The Power of Fuqua

Fuqua and Pratt previously worked together on the underwhelming remake of The Magnificent Seven. Most of the time, Pratt made jokes, mugged for the camera, and it wasn’t very entertaining.

But still, it’s Antoine Fuqua, a director who often gets great stuff out of actors. Fuqua is the man behind Training Day and The Equalizer movies, which have characters as entertaining to watch as the action. Fuqua, who first broke out directing music videos, knows how to craft brutal and swift action, visualize atmosphere, and doesn’t sugarcoat violence. He’s an all-around strong director who rarely missteps, so with The Killing List, maybe Fuqua can give Pratt a show that’ll highlight his talents again.

Have You Read the Book?

On his last combat deployment, Lieutenant Commander James Reece’s entire team was killed in a catastrophic ambush. But when those dearest to him are murdered on the day of his homecoming, Reece discovers that this was not an act of war by a foreign enemy but a conspiracy that runs to the highest levels of government.

Now, with no family and free from the military’s command structure, Reece applies the lessons that he’s learned in over a decade of constant warfare toward avenging the deaths of his family and teammates. With breathless pacing and relentless suspense, Reece ruthlessly targets his enemies in the upper echelons of power without regard for the laws of combat or the rule of law.