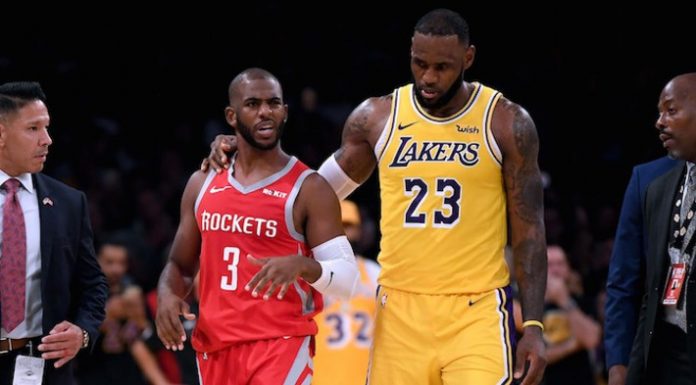 There has never really been a group of superstar-caliber players in the NBA that have ever been as open about their friendship as the Banana Boat crew of LeBron James, Dwyane Wade, Chris Paul, and Carmelo Anthony — the latter of whom, it should be noted, was not part of that infamous photo.

As such, whenever one of that crew becomes available on the trade or free agency market, there are whispers about them possibly teaming up. It’s why the destination most anticipated Anthony to end up in after his lengthy stint out of the league was the Lakers with LeBron, as none of them have been shy about discussing their friendship and desire to play together. Still, there are other factors that have kept Paul and Anthony from ever teaming up with LeBron and/or Wade, who have had two separate stints together as teammates.

That doesn’t mean it’s been for a lack of effort on their part, as Chris Paul explained in vague terms on his appearance on “Take It There” with Taylor Rooks. Paul said he still wouldn’t rule out teaming up with his buddies, and noted that there was a time where he, LeBron, and Wade came close to playing together, without sharing exactly when it was beyond “in the last 15 years.”

This, naturally, leads to some wondering when this could have been, and there seem to be two instances that make the most sense.

The first is in the summer of 2011, when Paul was traded to the Lakers, then had that trade overruled, and was ultimately dealt to the Clippers. That would’ve been the summer the Heat were coming off of a Finals loss to the Dallas Mavericks and perhaps they were in the mix on conversations with New Orleans about Paul and, possibly, shuffling their Big 3 from LeBron, Wade, and Chris Bosh to LeBron, Wade, and Chris Paul. That would’ve been a fascinating trade and how that turned out for all parties involved, namely whether the Heat would’ve had the same, more, or less success with a different trio going forward is a pretty amazing “What If?”

The other is the summer of 2017, when both Paul and Kyrie Irving were traded — CP3 went to Houston and Kyrie went to Boston. Maybe there were discussions of a Kyrie for Paul swap in L.A., and with Wade signing in Cleveland that summer, that would’ve put the trio all together with the Cavs. Again, it’s a really interesting scenario for all parties, as things have obviously worked out for the Clippers, the Rockets would’ve had to adjust their course, and Boston wouldn’t have had its two year run with Kyrie that ended in a tumultuous close.

It never happened in that way, and it’s hard to see how three of the crew can come together now given that LeBron and Anthony Davis are doing their thing at the top of the West and there’s not really a way to make salary matching happen with Paul, who is enjoying a terrific year in OKC. Still, Paul says never say never so we’ll see if further down the road they can join forces.